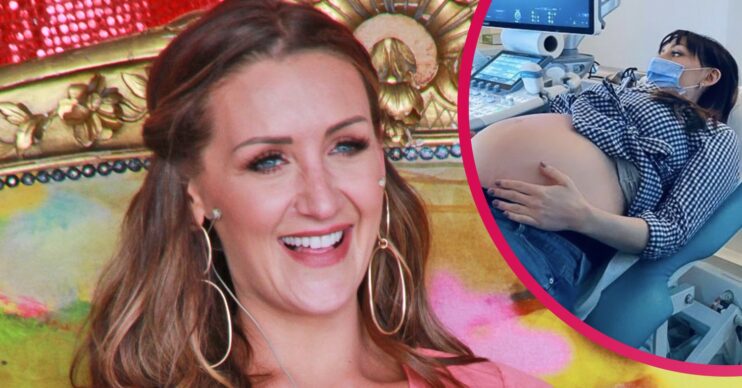 Catherine Tyldesley ‘amazed’ after getting glimpse of unborn baby

The ex-Corrie star is set to give birth in April

Catherine Tyldesley was left ‘amazed’ after attending a scan ahead of the birth of her baby daughter.

The former Coronation Street star is close to expecting her second child, a baby girl, with her husband Tom Pitfield.

Following a visit to a 4D scan yesterday (February 2), Catherine updated her fans after getting a ‘little glimpse’ of her unborn child.

A 4D baby scan is usually taken between the 24th and 34th week of pregnancy.

Unlike a conventional 2D black and white ultrasound, the scan produces life like images of the baby in the womb.

However, Catherine admitted her own scan didn’t exactly go to plan.

The 38-year-old actress shared: “We’ve just been to a 4D scan to see the next baby Pitfield… my heart might actually explode!

“We couldn’t get a clear picture of her face this time because my placenta was at the front, and the umbilical cord was just roaming around freely.

“But we kept getting little glimpses of her and she yawned twice, which was amazing. She was blinking, it was just incredible.”

Catherine went on to explain that she attempted to position her daughter in a different spot.

She continued: “I did try and move her around a little bit. I did a few lunges but her face was covered up by the placenta.

“I just want her here now and I wish I could fast-forward. It feels like I’ve been pregnant since 1942!”

The former soap star later shared a snap of herself during the scan.

The actress announced her pregnancy news back in October, saying: “We feel so lucky. When we found out, I just burst into tears.”

However, she also revealed that she was diagnosed with hyperemesis gravidarum (extreme sickness) shortly after finding out.

Speaking to Hello! Magazine, Cath explained: “It is not like morning sickness as you feel sick all day.

“It is the same thing Kate [Middleton] had, although I have not been as extreme as her. I was put on medication and that has been a godsend as I feel so much better.”

Meanwhile, last month, Catherine explained that she was experiencing pains in her crotch.

The star, who is already a mum to six-year-old Alfie, told fans: “Do you know, nobody warned me about that the first time round… Stabbing pains in the [blank]. It’s like baby’s got knitting needles.”