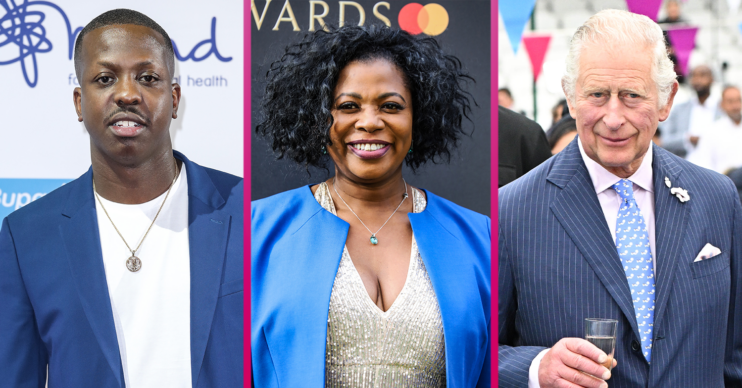 He died of a heart attack earlier this year

Brenda Edwards appeared to have son Jamal firmly in her thoughts as she attended a reception at Buckingham Palace yesterday (June 9).

The Loose Women star was invited to the royal residence to meet Prince Charles and the Duchess of Cornwall.

She was accompanied by her fellow ITV panellists Judi Love and Charlene White.

And it appears her late son Jamal, who died recently, was held close in her thoughts as she met the royals.

Brenda Edwards in secret nod to son at Buckingham Palace

The trio of Loose Women stars were at Buckingham Palace to celebrate the Commonwealth Diaspora.

The event celebrates the important contribution the population of the Commonwealth brings to the UK.

As a result, hundreds of guests were welcomed to the palace, from celebrities to key figures representing the arts, education, the NHS and the charity sector.

Brenda, meanwhile, attended with Judi and Charlene and a video showed the trio chatting to the Prince of Wales, with Judi belting out that she was enjoying the champagne.

Although no details could be heard, she did pay a touching tribute to her late son Jamal with her attire.

On her wrist, she wore a bracelet bearing Jamal’s name.

Earlier this month, Brenda sadly revealed that the heart attack was caused by Jamal’s use of recreational drugs.

She said that she was “in shock” after finding out her son’s cause of death.

Admitting she was “still trying to process” the news, Brenda confirmed that Jamal died due to “cardiac arrhythmia” which is caused by “having taken recreational drugs”.

Jamal’s link with the royals

Jamal was, of course, no stranger to the royals.

Read more: Silent Witness: Who is Tom Faulkner? How does he know Nikki and who plays him?

Back in 2015, he was awarded an MBE for services to music.