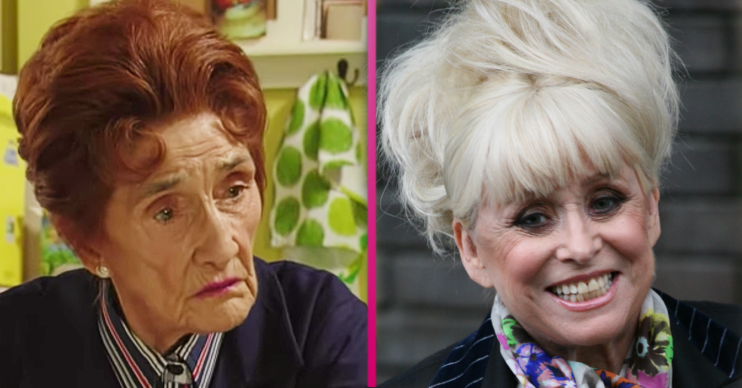 Such a touching moment between the two

Barbara Windsor was “bright, bubbly, pretty and friendly to everyone,” June Brown has said as she paid tribute following the star’s death.

The showbiz world has been in mourning since the death of the iconic actress was announced.

Among a swathe of tributes, veteran EastEnders actress June paid her own and recalled her final phone call with Babs.

June, 93, said Barabra would “always be alive in her mind”.

What did June say about the death of Barbara Windsor?

Speaking to The Sun newspaper, June said that Barbara was “tiny, bright, bubbly, pretty and friendly to everyone” when she first joined the EastEnders cast in 1994.

June also added that she became loved by everyone instantly.

The actress, who plays Dot Cotton, then described her final meeting with Barbara.

“About a year ago I called in to see her on my way home from work – we spoke very little that time, we just sat on her sofa, and I put my arm around her,” she said.

June continued: “And that was the last time I saw her.

“In our last phone call she asked me several times where I was – I finally said ‘I’m at home’ and her comment was ‘I’d like to come to your home’, but it was too late for that.”

What did Barbara’s EastEnders co-stars say?

Patsy Palmer, who played Bianca Jackson, said on Instagram: “We shared such magical times together and I’ll cherish every one.

“I can hear that laugh now as I sit and think about her. I hope it’ll ring in my ears forever.”

Elsewhere, Steve McFadden – who plays Phil Mitchell – said that he was “devastated”.

And Adam Woodyatt, who plays Ian Beale, said: “I grew up watching Babs in the Carry On films and for me to then work with her it was a privilege and honour.

“I have so many happy memories and moments that I will always cherish.”