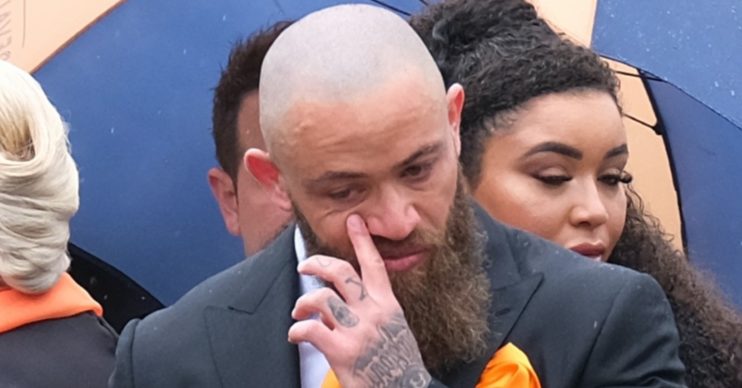 Ashley Cain and his partner Safiyya Vorajee attended the funeral for their daughter today (May 21).

Azaylia was only eight months when she tragically lost her battle to leukaemia last month.

During her funeral in Warwickshire, the couple were joined by mourners as they laid their “champ” to rest.

Azaylia’s tiny coffin lay in a horse-drawn carriage as the family made their way through Nuneaton.

Her coffin was surrounded by teddies, while a flower arrangement spelt out her name.

Ashley and Safiyya appeared visibly emotional as they stood underneath an orange umbrella.

Despite the awful weather, hundreds of mourners supported the pair as they paid their final respects.

Many of the mourners also carried umbrellas in orange and black.

Meanwhile, the procession comes days after Ashley reached out to fans ahead of the funeral.

Alongside photos of Azaylia on Instagram, Ashley wrote: “We would like to thank everyone for their prayers, words of sympathy & patience over the last few weeks, while we come to terms with the loss of Azaylia.

We would like to thank everyone for their prayers

“…and wide and all the beautiful gesture of kindness will live in hearts forever.

“We’ve been in correspondence with Warwickshire Police, to understand how we can give people who would like to pay their respects, the chance to do so.”

Furthermore, Ashley said: “Due to current restrictions the family will be attending a private service of celebration of Azaylia’s life.”

One wrote: “I pray I never have to feel what it feels like to say goodbye to my baby. My thoughts are with Azaylia Cain’s family today.”

A third said: “Can’t even begin to think how Ashley and Safiyya are feeling today. You may finally rest in peace Azaylia Diamond Cain, fly high champ.”

Furthermore, another added: “Thinking of little #AzayliaCain and all her family today #azayliasday.”

A fifth shared: “Today is Azaylia’s day – may you rest in paradise little lion. My heart hurts for her parents.”