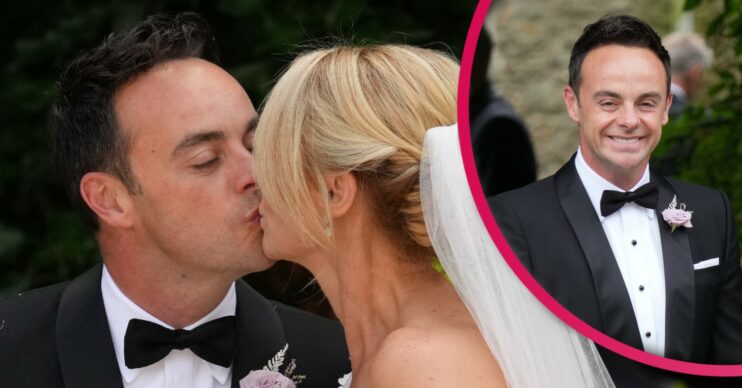 Ant McPartlin gets new tattoo as ‘tribute to wife Anne-Marie’

Ant tied the knot with Anne-Marie earlier this month

Newlywed Ant McPartlin has got a new tattoo, and it appears to be a tribute to his new wife as they enjoy their honeymoon.

Ant, 45, has been snapped enjoying quality time on the beach in Portugal with Anne-Marie Corbett with a new tattoo on show.

The popular presenter went topless as he spent time in the sea in the Algarve – revealing new ink on his chest dedicated to his wife.

In photos obtained by The Sun, the design shows a large heart on his left-hand side with the initial ‘A’ etched inside it.

The happy couple have been making the most of their time abroad since they tied the knot earlier this month.

The two couples were seen singing and dancing and making the most of their time together in the sunshine.

They then indulged in an afternoon of beach-based sports including a spot of badminton for Ant and Anne-Marie.

Anne-Marie’s two daughters from her previous marriage to Scott Corbett have also joined the pair on their trip.

Ant reportedly said that he couldn’t be happier to have Poppy and Daisy in his life.

He apparently said in his wedding speech: “They are amazing girls and I’m grateful that they call me Dad.”

Ant and Anne-Marie became an item after a turbulent time in his life that led to the breakdown of his previous marriage to makeup artist Lisa Armstrong.

Anne-Marie was working as his PA at the time and he has praised her for sticking by his side at his “lowest depths”.

The couple became engaged at Christmas last year and planned their wedding through the pandemic.

They then finally tied the knot on August 6 with a star studded bash at a luxury hotel in Hampshire.

Ant’s lifelong best friend and sidekick Declan Donelly was by his side on the day acting as best man.

Dec also gave a touching speech where he apparently praised his on-screen presenting partner for the years they have spent together.