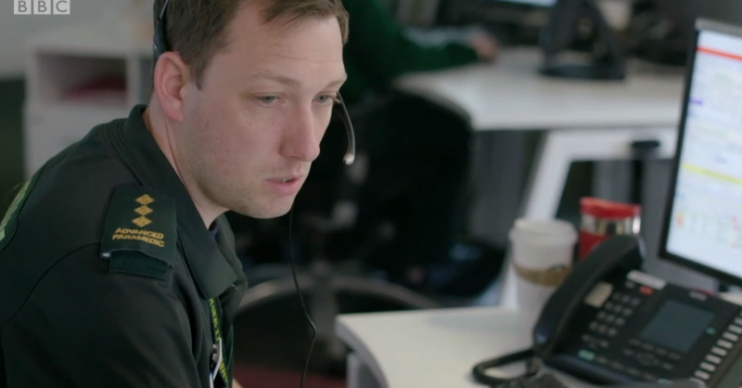 What a waste of vital resources

Fans of BBC One documentary series Ambulance were fuming last night (May 16) after a 999 call about a man stabbed to death turned out to be fake.

Someone called emergency services to say their grandad had been killed when two people started fighting and one of them got a knife.

The handler asked: “Someone’s killed your grandad with a knife?”

When the caller confirmed that’s what had happened, the operator asked for their age and the caller said they were nine years old.

What’s more, they claimed their grandad’s killer was still on the property.

The operators quickly called the police and dispatched two air ambulances and four vehicles, along with an emergency medical dispatcher, senior clinicians and other emergency services professionals to the scene.

Paramedic Tim was the first to arrive at the house where the incident had reportedly taken place.

He stood near the property and was concerned about the nine-year-old inside, so he told an operator: “I’m happy to approach with caution. If anything happens, I’ll retreat.”

Shortly after, he revealed: “There’s definitely nobody injured. The family have seemed genuinely shocked that we’re around.”

The operator then confirmed the call had been a hoax, prompting disgusted viewers – well acquainted with the gravity of the calls the operators have to take – to vent on Twitter.

One said, alongside a string of angry-face emojis: “Hoax callers make me angry, absolute scum #Ambulance.”

Another tweeted: “The hoax. This made me so angry watching. Teach your children early the seriousness and consequences. Better still, educate them early about our emergency services and how to correctly use, NOT abuse.”

A third wrote: “Hope they catch whoever was behind the hoax call… disgusting behaviour. #Ambulance.” 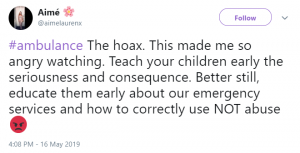 Others said fakers should face ‘rough justice’ and called for fines, community service and prison time for those who waste the NHS’ vital resources.

“That person who made that hoax call should be charged and put in prison, absolutely disgusting how many vehicles they sent out for that call, plus helicopters. Someone could have died whilst they were attending that fake call,” said one.

“Two air ambulances, four vehicles, one emergency medical dispatcher and all the rest supporting… All for a bloody hoax call. [Bleeping] [bleeps]. Hoaxes callers need rough justice, stick ’em on front lines so they see what they are [bleeping] up…” tweeted another.

Someone else commented: “Community service for that hoax caller, and a fine for all the money that cost, and how about they have to sit down and watch a video of some REAL people DYING because an ambulance couldn’t get there in time! Absolutely raging.” 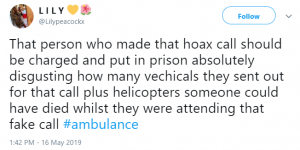 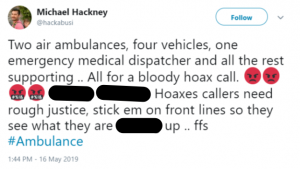 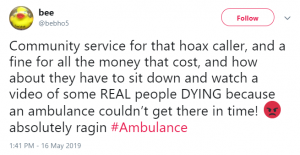 What do you think is an adequate punishment for a 999 hoax caller? Leave us a comment on our Facebook page @EntertainmentDailyFix and let us know.