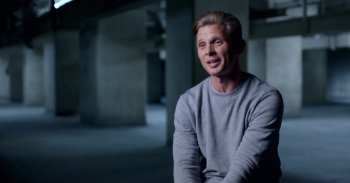 The TV presenter described it as the "most profound experience"

Jeff Brazier said he spoke to his six-year-old self while being interrogated on Celebrity SAS: Who Dares Wins.

The TV presenter, 39, said taking part in the gruelling Channel 4 show was so intense his mind started to play tricks on him.

During an interrogation, Jeff said he was visited by his six-year-old self, who urged him to keeping pushing through.

Read more: The Duchess of Sussex ‘could be induced as she’s a week overdue’

He said: “They’ve got you in stress positions and you’re being blasted with noises like babies crying and pigs squealing.

“After about eight hours of that my mind wandered to somewhere so distant from where any human is used to operating in, all of a sudden I was visited by my inner child, or your second self.”

Jeff went on: “I was being visited by this little six-year-old version of myself and he was like, ‘I trust you, I know that you can take it from here, so I’m not going to play as much of a part’ It was really, really something.”

He described it as the “most profound experience” he’s ever had.

In reply to one of his Instagram followers, Jeff said: “Had a mad experience in interrogations, my inner child came to me after about 10 hours and told me it wasn’t scared anymore.

“It was the most profound experience I’ve ever had. I’m guessing you have to be in an interrogation to access a realisation like that (sic).”

Jeff, 39, recently admitted he found it “uncomfortable” to watch the show back, and is determined to “improve” himself, though his fans said he was being too tough on himself.

He wrote on Instagram: “I know my strengths because of all I got through in Chile but I’ve also seen my weaknesses and there are many. Invaluable opportunity to hold the mirror up though, I’ve seen a few things that weren’t entirely visible before, in real life you just aren’t challenged in this way.

“I’m grateful for the reality check even though it’s tough sharing the very worst of yourself with the general public. I’m big enough to hold my hands up. It’s time to act on those lessons & improve myself and I’ve been doing that since the day we got home.”

Olympian Victoria Pendleton also shared her experience with the interrogation process, saying they focused on her “failures”.

“The actual interrogation room was bad, because they played you all off one another and they tried to push my buttons so they were talking about my failures,” she told the Mirror.

“How people let me down and how does that make me feel.”

Other celebrities who have been put through their paces by chief instructor Ant Middleton for charity include actor Jeremy Irvine, rugby player Ben Foden and Loose Women’s Andrea McLean.