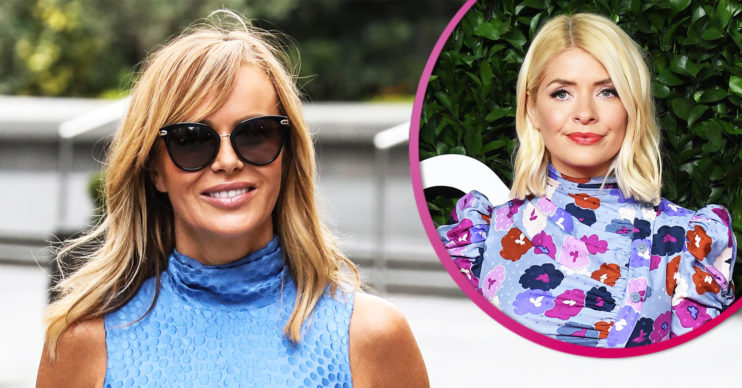 Amanda Holden has delighted fans with a family photo of her husband and their daughters.

The Britain’s Got Talent judge is holidaying in the South of France and enjoyed a dinner with Piers Morgan on Thursday evening (July 23).

Amanda, 49, posed with her family at a restaurant during the day and her fans thought her eldest daughter Alexa, 14, looked just like Holly Willoughby.

One person said: “Your daughter so reminds me of a young Holly Willoughby!”

Another agreed: “I was thinking the same thing!”

A third added: “Is it just me that thinks your daughter is like Holly from This Morning!”

Meanwhile, on Thursday evening, Amanda enjoyed dinner with her family and Good Morning Britain Piers and his clan.

Piers shared a photo of himself and Amanda at the restaurant as they enjoyed a glass of wine.

Your daughter so reminds me of a young Holly Willoughby!

He wrote: “Britain’s got talent.”

Fans loved seeing the pair together, with one commenting: “Smashing photo!”

Another said: “Aww hope you’re having a lovely time,” while a third added: “Lovely food and a great photo Piers.”

The pair were joined by Piers’ wife Celia Walden and his three sons Spencer, Stanley and Bertie, as well as Amanda’s husband Chris Hughes.

Spencer shared a clip with a shot of Piers and Amanda being sweetly serenaded by a musician.

Earlier on in his holiday, Piers tore a tendon in his leg and was given crutches.

Alongside a photo of himself and his sons, Piers said on Instagram earlier this week: “Peg-leg. (Nothing like tearing a tendon on Day two of a six-week holiday).”

Meanwhile, on Twitter, the star told fans his sons had told him to “man up”.

When someone asked how his ankle was, Piers replied: “Sore. But my sons are constantly reminding me to take my own regular advice over such matters & ‘man up’. So I am.”