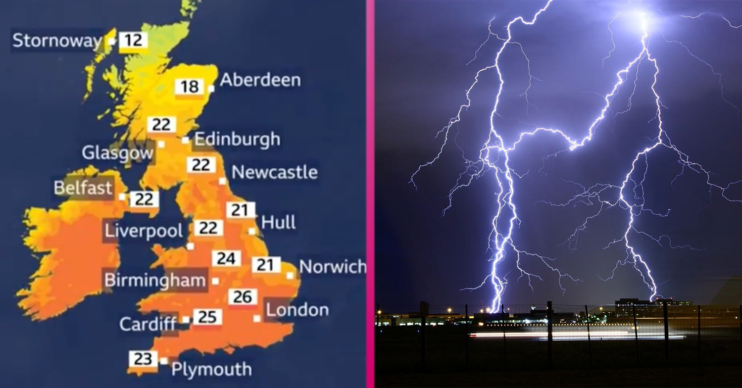 Temperatures are set to plunge!

Britain is set to bask in highs of up to 28˚C today as the nation enjoys warmer weather than Ibiza.

As lockdown eased, blue skies become a near-permanent fixture for many.

And, according to the Met Office, the mercury will continue to rise today (June 2).

Spokesperson Greg Dewhurst said: “Much of the UK will stay warm and sunny.”

He added that “temperatures across the country” would be very similar to yesterday, with “highs between 24˚C and 27˚C”.

He added that it hit 28˚C in Wales on Monday and it could get that hot again today.

Read more: Sex in your home with someone you don’t live with is now illegal

However, he added: “The exception will be northern Scotland, which will see cooler and wetter weather and a band of rain pushing across.”

An end to the sunshine

And it’s that band of weather which is said to bring an end to those gorgeous sunny skies.

Greg revealed: “That cooler weather is going to push south as we go into Wednesday, and by lunchtime much of England and Wales will likely see showers.”

He also said temperatures will plummet to between 15˚C and 20˚C.

Thunderstorms are forecast in Scotland, which are predicted to head into northern England and Ireland overnight on Wednesday.

Met Office forecaster Aidan McGivern revealed: “Thundery downpours and slow-moving showers could cause one or two issues, in particular given the dry state of the ground at the moment.”

Cloud and rain will continue south with possible localised downpours and thunderstorms across southern England and southern Wales.

Thundery downpours and slow-moving showers could cause one or two issues.

The cold and wet weather looks set to continue into Thursday and Friday, too.

“It’ll be breezy with mixture of sunny spells and scattered but heavy showers,” Dewhurst added.

The outlook for Saturday looks mixed.

In the north east, Brits can expect cloud, rain and gales.

Read more: Kids turned away at school gates on first day back

In the south there is better news, with sunshine interspersed with showers.

Brits on the beach

The dip in temperatures does bring good news for the government though.

Matt Hancock warned yesterday that Britain could see a second spike in the coronavirus infection rate as Brits flocked to the beach to enjoy the warmer weather.

He said should the R rate rise, Britain could head back into a full lockdown.