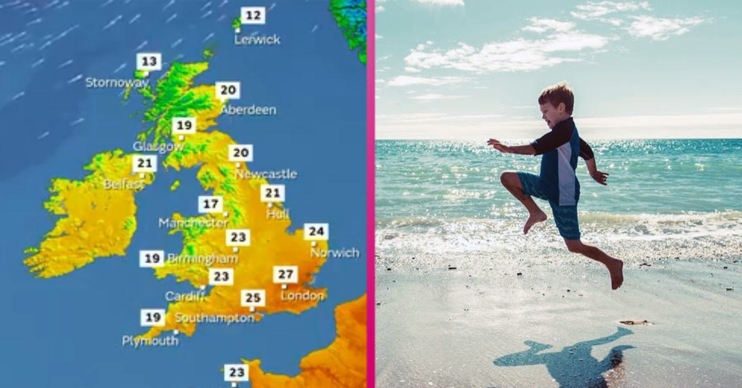 It’s time to dig out those paddling pools as the Met Office says the sizzling temperatures Brits enjoyed over the Bank Holiday Weekend are set to stick around.

And it’s come just in time for the half-term holiday, with many parents set to take a week off of home schooling to enjoy some fun in the sun.

The heatwave – where temperatures are expected to reach 28˚C – is the second in as many weeks.

Last week, Brits enjoyed the hottest day of the year so far.

Temperatures of 28.2˚C were recorded at Santon Downham in Suffolk.

And this coming week looks set to be just at hot.

Later today, the Met Office has said that temperatures could reach 27˚C.

And it’s predicted that the warmer weather is set to stick around. Long-range forecasts show Britain basking in glorious sunshine as far ahead as Sunday, June 7.

Hotter than the Med

The warmer weather should go some way to making up for the lack of summer holidays this year.

Forecaster Greg Dewhurst said: “It’s hotter than the Mediterranean at the moment and it’s going to stay like it all week.”

He added: “We’re going to see temperatures well above the average.”

And, Greg said, records could be broken as we head into the weekend.

“It’ll get even hotter as we approach the weekend with 28˚C possible on Sunday. It could beat the record for the hottest day of the year so far,” he revealed.

However, if you’re planning on making the most of the sun, Brits have been advised to take care when visiting beaches.

As well as maintaining social distancing, the RNLI and Coastguard have warned of a shortage of lifeguards due to the coronavirus pandemic.

It’s hotter than the Mediterranean at the moment and it’s going to stay like it all week.

There is currently a “chronic shortage” of lifeguards patrolling British beaches.

As a result, some 200 beaches are currently unmanned.

It’s feared only 30% of beaches will be patrolled during the summer season.

Beaches will be chosen based on risk and popularity.

If you’re heading to the coast #BeBeachSafe: check the weather and tides, keep an eye on your family and don’t use inflatables.@RNLI‘s lifeguards can’t be everywhere this summer, in an emergency call 999 for the Coastguard. #999Coastguard #RNLI pic.twitter.com/IrsvwlgzUO

As such, Brits have been urged to look out for each other.

Instructions have also been issued that ban inflatables from being brought to the beach.