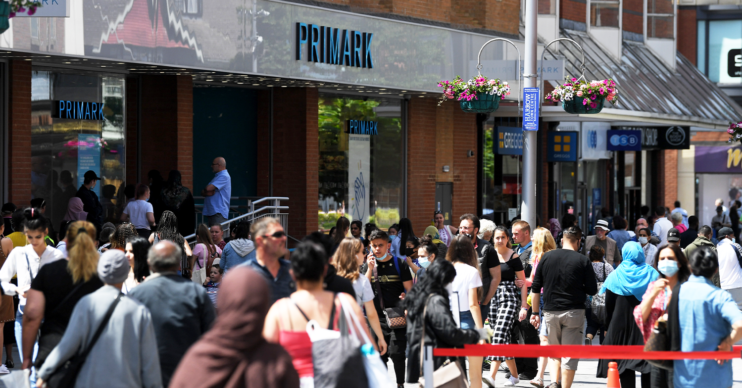 And there's not even any new stock in store!

Primark employees were met with chaotic scenes as the chain reopened stores across England yesterday (June 15).

Now one worker has lifted the lid and revealed what it was really like inside the store.

The unnamed employee branded the reopening “hell” and claimed there are concerns over social distancing.

And they even said that fights had threatened to break out as people queued to get into the shop.

They told Metro: “I’m not working today thank god. The manager has said it’s already been hell. People were queuing from 3am. I know the people nearer the front camped out all night and apparently there’s already been near fights.”

They also added that there is no new stock in store and that things are just how they left it before lockdown was imposed.

They’ll probably try to try things on on the shop floor, which is obviously forbidden.

Social distancing measures are in place in store and shoppers have been told not to touch items they don’t intend to buy.

People will break the rules

However, the worker said staff and security don’t have eyes in the back of their heads and not everyone is back to work yet.

“[Customers] technically have to [social distance], but staff and security only have two eyes and we don’t have everyone back yet as it’s not needed. So guaranteed there will be lots of people breaking the rules,” they said.

The person added: “They can’t try anything on, even shoes and sunglasses, and fitting rooms have closed. They’ll probably try to try things on on the shop floor, which is obviously forbidden.”

In order to help try and stop the spread, shoppers have to look for their size in a stack of folded clothes without touching them.

Hand sanitiser stations are positioned at the door and dotted around the store.

Social distancing reminders are also placed on the floor.

Primark said it was “closely following” all government safety advice.

CEO Paul Marchant said: ‘”We are asking customers to respect the measures we have put in place to help ensure shopping at Primark is an enjoyable, safe experience for everyone.”

ED! has contacted Primark for a comment on this story.