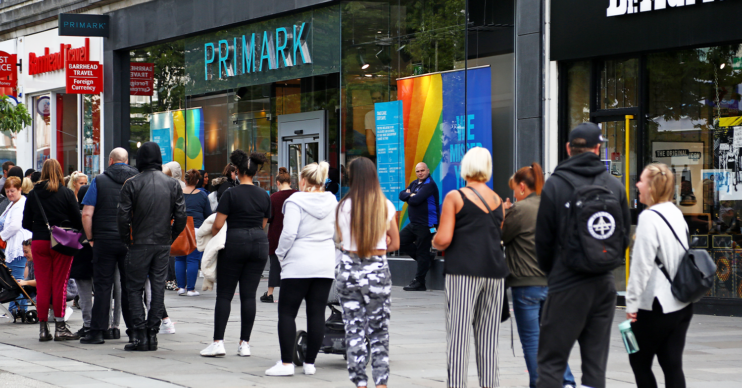 Primark shoppers branded ‘stupid’ as they queue outside stores from 5am

The high street reopened this morning (June 15) and some Brits were so keen to bag a bargain they started queuing outside Primark at 5am.

They’ve been shut since March, when Boris Johnson announced lockdown.

Pictures from across the country show customers standing outside the store, waiting for the doors to open.

Hundreds queuing outside #Birmingham #Primark this morning – they’ve opened the doors ahead of the official 8am start because of demand @bbcwm @bbcmtd pic.twitter.com/wVkn1DFE6U

At the flagship Primark store in Birmingham, people queued overnight so they could be first to get their fashion fix.

“Camping outside Primark. The world is actually done,” said one.

“The queues outside Primark, I cannot get over how dumb people are, it’s so stupid,” said one on Twitter.

“How desperate are you for 90p flip flops?”

“Massively long queues of deluded ***** queuing outside @Primark on Oxford Street,” slammed one. “How f**king desperate are you for a pair of 90p flip flops?”

“I can’t believe people have been queuing since 5am to get into #primark. What is this world? What are they hoping to get – discounts on already dirt cheap stuff ? #madness,” said another.

“It’s really depressing that there is a massive queue of 100s outside Primark in my home town this morning. #StaySafe.” said another.

“You’re queuing for Primark in the middle of a pandemic,” tweeted another.

“Nothing says desperation like queuing for Primark in a viral pandemic,” said another.

Others slammed the new shopping rules customers will have to follow.

Nothing says desperation like queuing for Primark in a viral pandemic.

From today, shoppers will be advised to wear a face covering in store.

Large families will be banned. Fittings rooms will be closed. Customers will be asked to pay via contactless methods.

So you’ve been in your house for 3 months and you risk catching coronavirus to go to Primark 😶 I mean, is it worth it?! 😂🤦🏻‍♀️ #shopsreopening

People are queueing up outside Primark in Oxford Street since early morning hours!!

One-way systems and barriers will be in place. There are also floor markings to enable shoppers to maintain social distancing.

Shoppers will also be advised to use hand sanitisers as they shop. They’ll also be asked to refrain from picking up items as they browse.

Returns will be held to one side for 72 hours before they are returned to the shop floor.

“Boris wants us to ‘shop with confidence’ but who wants to queue for ages, not touch anything in store and not try anything on? I’d rather shop online than be treated like a biohazard,” one said.

Primark is only reopening stores in England at the moment.

There has been no announcement on when stores in Wales, Scotland and Northern Ireland will follow suit.

Other non-essential shops in England can also reopen from today, as long as they can comply with the new government measures to keep staff and shoppers safe.

Head to our Facebook page @EntertainmentDailyFix and let us know if you’ll be heading to the shops.