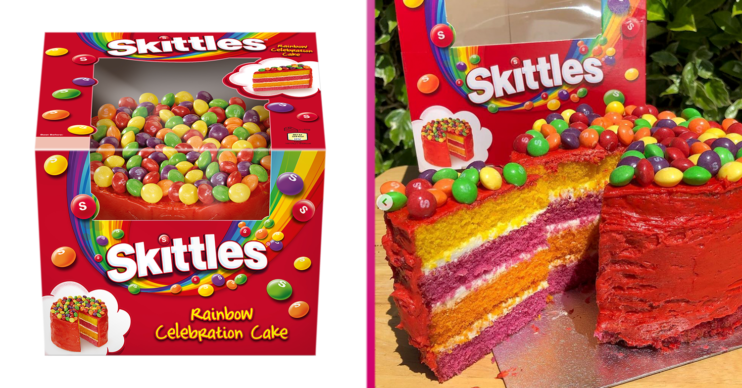 Skittles fans can now enjoy an even bigger slice of the rainbow with the launch of the new Rainbow Celebration Cake.

And, unlike the previously released Skittles Rainbow Party Cake, which was dotted with a few of the sweets, the newcomer is absolutely covered in them.

“If you love Skittles you will love this cake,” said one happy customer.

“My son loves Skittles and this cake was no disappointment,” said another fan. “Full of brightly coloured sponge and tastes just like Skittles. We loved it!”

Another added: “Lovely and soft fruity flavoured icing – such a nice sponge cake.”

“The flavours in the sponge layers are so sweet, just like the actual Skittles. This cake was a big hit in our house,” they added.

My son loves Skittles and this cake was no disappointment.

Although some did quibble over the cost of the cake.

“Shame it wasn’t a lot bigger for the price,” said one.

Another quipped: “Couldn’t feed 16, though – everyone wants big slice!”

The cake is on sale in Morrisons, Asda and Tesco now.

However, if you’re celebrating a birthday soon and are in the market for a cake, it’s decision time.

As well as the Skittles celebration cake, two other whoppers have also been launched by makers Mars.

If you’re a Milky Way fan, the Shooting Star Cake is on sale in Tesco and Morrisons now.

It’ll launch in Asda next month.

It’s topped with “luscious swirls of light and fluffy chocolate frosting” and finished with a classic Milky Way Shooting Star.

Meanwhile, M&M’s fans are in for a treat with the new Hot Air Balloon Cake.

It features chocolate sponge filled and covered with chocolate frosting and decorated with lots of M&M’s and an edible character.

It’s on sale in Tesco and Morrisons now and Asda next month.

If you’re after something a little smaller to satisfy your sweet tooth, though, you’re also in luck.

The Galaxy Triple Chocolate Cake and the Maltesers Buttons Cake both serve eight and cost £3.

Head to our Facebook page @EntertainmentDailyFix and tell us which you’ll be trying.