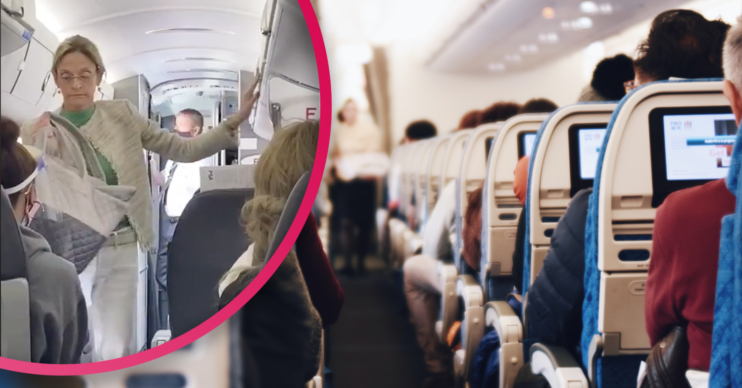 Face masks furore: ‘Argumentative’ woman kicked off flight for refusing to wear one

Face masks are pretty much compulsory for anyone wanting to jet off on holiday now.

However, one woman disregarded the rules put in place by airlines when she attempted to board a flight not wearing one.

But instead of being allowed to take her seat, the woman was promptly ejected from the plane.

The woman was apparently “argumentative” as she queued at the gate to board the plane.

Onlookers said she insisted on boarding first and was causing an “obvious scene”.

Once on board, without her mask, she allegedly started making phone calls and arguing with cabin crew, who asked her to stop and put her phone away.

Another passenger even got up to confront her about her behaviour with no mask.

One fellow passenger, Jordan Slade, took a video of the altercation and posted it to her TikTok account.

She told the Daily Mail: “She also refused to wear a mask putting others on the flight at risk… Another passenger even got up to confront her about her behaviour with no mask.”

The woman – who was on an American Airlines flight from Ohio to North Carolina – said she had a medical condition that made her exempt from wearing a mask.

However, American Airlines insists that ALL passengers – except children under two – wear a face mask.

“Be sure your face covering is on before you board the plane and wear it during your flight. If you decline to wear one, you may be denied boarding and future travel on American,” the policy states.

“Just leave. We have flights to get on!” one passenger can be heard shouting in the video.

The furore caused such a delay that the plane had to head back to the terminal to refuel before it could eventually take off.

After she finally grabbed her three carry-on bags and was escorted off the plane, her fellow passengers clapped and cheered.

“You can clap all you want,” the woman can be heard snapping in the video.

Why do we have to wear face masks?

It’s thought that face masks can help to slow the spread of coronavirus.

People have been instructed to wear them in enclosed spaces such as shops, takeaways, in airports and on aeroplanes.