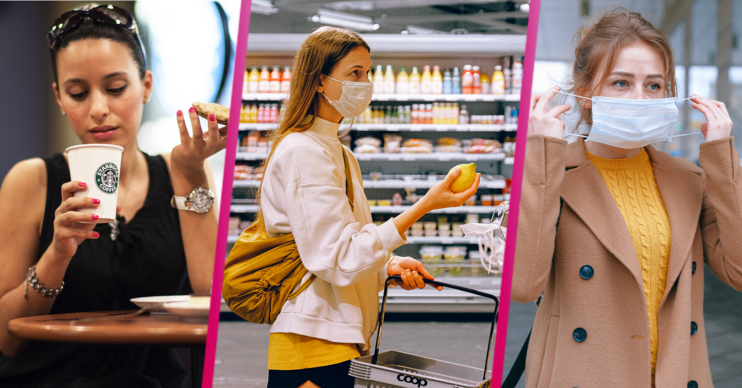 The government has been accused of sending out “mixed messages” over the use of face masks in takeaways.

From tomorrow (July 24), it will become law to wear a face covering inside a shop or supermarket in England.

Anyone not adhering to the rule could be hit with a hefty £100 fine.

However, confusion reigns over the use of face masks in takeaways.

And the government doesn’t appear to be helping matters.

Kay stated: “The health secretary said I do need to wear it, Number 10 say I don’t – give me the definitive.”

“The definitive is it’s encouraged for you to do so,” Sharma replied.

“I thought it was legally binding,” she retorted.

“Well if you’re going into a shop or supermarket from the 24th of July, it is mandatory,” he replied.

“You can see why people are confused,” Kay stated.

“Well I think it’s been pretty clear what we said and I’m happy to repeat it again. They’re mandatory on public transport, mandatory from 24th of July in shops and supermarkets,” he said.

“So if you go in for a takeaway coffee, do you need to have a mask on?” Kay asked.

“We’re recommending that you wear a mask if you are popping in,” he replied.

Read more: Biscuits that look like retro ice lollies exist and you’ll want to eat them all

Cabinet minister Brandon Lewis later explained that you will have to wear a face mask in takeaways.

He added: “If you’re going into Pret a Manger and you are eating in Pret a Manger, which in some of their stores you can, then obviously you wouldn’t be wearing a face mask because you’re eating.”

Lewis confirmed: “But it’s clear, good common sense that if you’re going in to buy a takeaway, and leaving again, you’re treating it like a shop – and you should be wearing a face mask.”

Many Brits are, unsurprisingly, confused and have accused the government of giving out mixed messages.

If you’re going in to buy a takeaway, and leaving again, you’re treating it like a shop – and you should be wearing a face mask.

“Brandon Lewis: ‘If you are going into a takeaway place to eat or drink in there, then no you don’t have to wear face masks.’ But then: ‘If you are treating it like a shop, buying your sandwich and your coffee and leaving again, you should.’ So it’s safer to stay there longer then?” another asked.

People who work in cafes are also confused.

One tweeted Matt Hancock to ask: “I work in a cafe where customers come to the bar for food and drinks to consume inside or as takeaway. Can you clarify if customers have to wear a face mask at the bar when ordering or not please? #confused #facemasks #Covid19UK.”

However, some said they did understand the new rules.

“If you go inside to a retail unit wear a mask – be that a bank hall, petrol station, estate agency or takeaway. And if in doubt, wear a face mask! What’s complicated about that?” one Brit stated.

“It’s not hard, if you’re eating or drinking then obviously you don’t wear a mask. If you’re not, just put it on,” said another.

Another slammed the many confused Brits who have been asking questions.

“I am proud to be British but people make me so frustrated. Other countries are told to wear face masks SO THEY DO! Not here, we ask a million ridiculous questions. You can’t wear a face mask to eat, but whilst queueing at a takeaway WEAR A MASK. Simple,” they posted.

Well, that clears that up, we guess!

Head to our Facebook page @EntertainmentDailyFix and tell us what you think of the government’s advice.