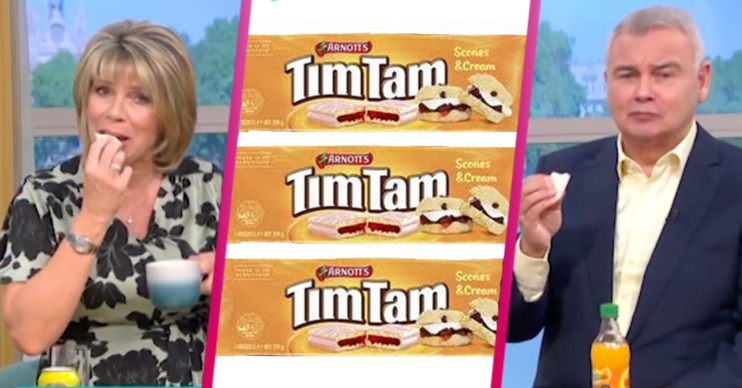 And they're designed for the British palate

Good news could be on he horizon for fans of Australian Tim Tam biscuits.

The biscuits are much like our Penguins, but Prime Minister Boris Johnson appears to be on a mission to bring them to the UK.

He was recently seen brandishing a pack and declaring he wants a “trade deal with Australia” so Brits can enjoy the Tim Tam “at a reasonable price”.

On today’s This Morning, Eamonn Holmes and Ruth Langsford played the video of Boris, before taste testing the biscuits during a segment called: “The Australian Tim Tam is coming to the UK.”

Read more: Biscuits that look like retro ice lollies exist and you’ll want to eat them all

He added: “I want a world in which we send you Marmite, you send us Vegemite, we send you Penguins and you send us, with reduced tariffs, Arnott’s Tim Tams.”

The PM concluded: “How long can the British people be deprived of the opportunity to have Arnott’s Tim Tams at a reasonable price?”

“It makes sense,” said Eamonn, before Ruth explained Arnott’s had created a packet of Tim Tams “made for the British palate”.

Only four packets of these exist, they have sent us a special packet to taste test.

“So this is based on scones, jam and cream,” Ruth revealed.

“Only four packets of these exist, they have sent us a special packet to taste test,” she said.

Ruth them proceeded to disgust Eamonn by performing the “Tim Tam slam”.

She bit off opposite corners of the biscuit before dipping it into her tea and sucking the tea through the biscuit.

“That’s most undignified, stop being such a pig, if I was doing that you’d be disgusted. ” Eamonn stated, before requesting: “Can I please taste one?”

The prototype biscuit appeared to get the thumbs up from the presenter.

“Oh Jim jam Tim Tam,” he cooed at the biscuit.

He then added: “It’s something that’s going to be in our shops more and more if this trade deal goes ahead.”

The British Tim Tam started as a joke after Arnott’s saw Boris’s video.

They created four flavours – Bangers & Mash, Scotch Egg, Fish & Chips and Scones & Cream and posted a picture of the packets to Instagram.

G’DAY BRITAIN… We heard you might want more Tim Tam biscuits over your way! We can’t blame you… they’re irresistible! But maybe you would love a few flavours more inspired by your British cuisine? Check our story to vote for your favourite British Tim Tam flavour! 😍 @borisjohnsonuk #ThereIsNoSubstitute

The account then posted a poll on its stories to find a favourite.

Unsurprisingly, Scones & Cream won and now it seems at least one of the “joke” flavours of Tim Tams could be coming to our supermarket shelves.