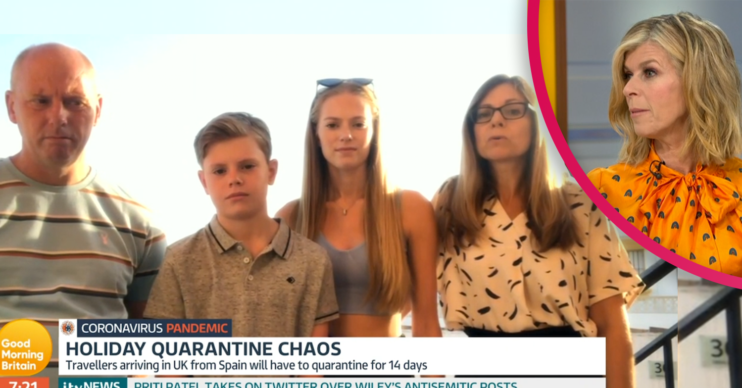 GMB viewers have ripped into a family for complaining about the Spain quarantine rules.

The couple explained that had they been aware that the rules would change, they would have cancelled their holiday.

Jo said: “We thought long and hard actually about coming on holiday.

“We made the decision quite late on once the Foreign Office said that non-essential travel was okay again.

“Also, we have friends that live out here who told us everyone here was following the rules and wearing masks.

“Every precaution has been put in place so we decided to take the risk, but obviously we would not have done that if we’d known we would have to quarantine when we got home.”

Tom, who works in the building trade, admitted the family would now be unable to earn money for the next month.

“It’s going to have a big impact to be fair,” he told presenters Kate Garraway and Ben Shephard.

“Work has just started to pick up again so I’ve booked a load of work in ready to start as soon as I get back – but now, I’ve had to cancel all that and push the bookings further back.

“Hopefully the customers will stay with me but there’s a good chance that they won’t.

“So we won’t make any money in the next money.”

Instead of focusing on the negativity, the family, who opted to drive to Spain instead of fly, insisted they were going to try and make the best of a bad situation.

But GMB viewers tuning into the live interview had no sympathy for the family of four.

Taking to Twitter afterwards, one fan wrote: “Am I supposed to feel sorry for this family on holiday whilst on furlough. F*** off!”

Read more: When is Piers Morgan back on GMB? Host replaced by Ben Shephard

Another then added:  “@GMB b****x to that family! If he was that bothered about work he would drive home now, lock down and be ready to start again!”

Moments later, a third tweeted: “@GMB want us to feel sorry for this white family that went on holiday to Spain and now have to quarantine for 14 days. 1st world problems huh.”

Shortly after, a fourth commented: “No sympathy for the family they booked knowing full well what might happen they took risk and it’s backfired @GMB.”