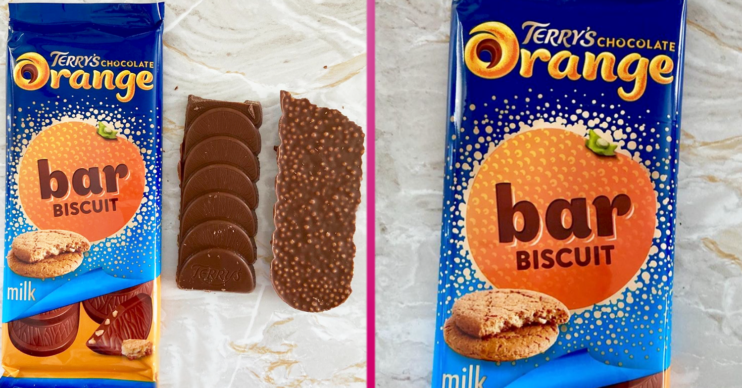 The White Chocolate Orange is also set to return

It’s been an epic week for new chocolate launches, especially if you’re a fan of chocolate orange.

This week, the original and the best, Terry’s, has launched a raft of new products.

And the latest one to be brought to our attention sounds nothing less than delicious.

In a week that we heard news of a Terry’s Chocolate Orange Bar with Cranberry comes its even more delicious sibling.

Let us introduce you to the Terry’s Chocolate Orange Bar with Biscuit.

“I’ll be trying some of that!”

And, as you can see from the pictures, the crunchy biscuit isn’t used sparingly!

“The biscuit pieces combined with the orange chocolate make this bar perfect!

“The crunchiness of the biscuit is a perfect addition to this bar!”

One said: “Buzzing! I will be trying some of that.”

Another added: “Us orange chocolate lovers are having the best time right now.”

“This looks so good,” confirmed another.

“This looks insane!!” another exclaimed.

Others said they were “on a mission” to find the new bar.

“Can’t wait to try this!” another said.

Well, if you feel the same, word reaches us that the bars are currently on sale at the Co-op.

However, NewFoods revealed they’ve actually found them for just £1 a bar.

You’ll have to head to Heron Foods if you want to grab a bargain.

The new bar is the latest in a long line of orange-flavoured confectionary products.

Cadbury has launched Giant Buttons and Fingers in the flavour.

An orange Toblerone has also just been released.

It’s not Terry’s, it’s mine

In more good news for Terry’s fans, as well as the Biscuit and Cranberry bars, the popular White Chocolate Orange has also been relaunched.

Bags of mini segments were launched earlier this week, then came the big news.

Posting to Instagram, Terry’s revealed the Christmas treat would be arriving early this year.

“2020 has been… 2020. So, we thought we’d have Christmas in August this year. Do not remain calm because the White Chocolate Orange 🍊 is BACK,” the brand posted on Instagram.

It’ll be in stores at the end of August.