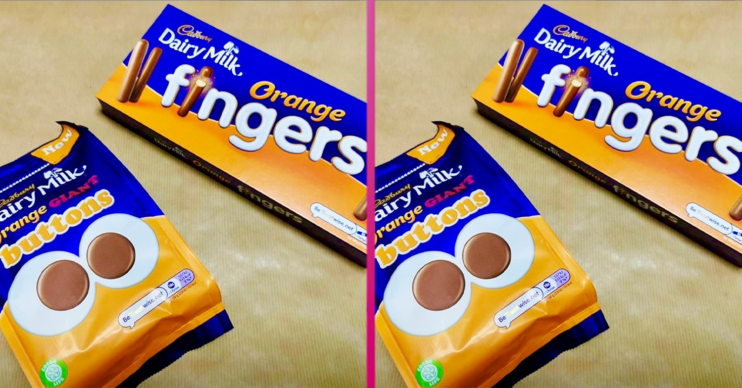 They're on sale in selected stores NOW!

We hope you’re sitting down…

The chocolate giant has launched orange-flavoured Fingers and Giant Buttons.

The news comes hot on the heels of the revelation that you’re now able to pre-order the delicious Cadbury Orange Twirl.

Who broke the news of the new Cadbury goodies?

Read more: You can now pre-order the Cadbury Orange Twirl

And their followers were nothing less than delighted.

“We need to find these!” said one.

“Will be searching the shops,” said another.

“Need these right now!” declared another.

Here at ED!, we figured you’d feel the same, so we made it our mission to find out where you can buy these chocolate orange Cadbury goodies.

Where can I buy the new treats?

NewFoodsUK revealed: “They are now rolling out into convenience stores, and will be in supermarkets very soon!”

“TRAINERS ON… INTO CAR… OFF TO LONDIS.. GO GO GO GO GO!” shouted one of Kev’s followers.

Others were quick to hail the chocolates a “game changer” that had turned 2020 around.

One said: “Now these buttons are a game changer.”

Another added: “2020 is really starting to look up with this chocolate situation.”

“It’s like the year of chocolate orange!” declared another.

“It’s like karma, coming to balance everything out!” another chocolate orange fan joked.

“I need these in my life,” another declared.

Last year Twirl Oranges were hard to find, so this year we’re doing a presale before they hit the shops.

❤ this tweet to get a reminder about the first release. They’re yours for 69p, but you’ll have to be quick; it’s first come, first served in the #TwirlOrangePresale. pic.twitter.com/J2aulktptQ

“My dreams are coming true,” another revealed.

Others couldn’t decide what they were more excited for, the Giant Buttons or the new Fingers.

“Omg the Fingers though,” said one biscuit fan.

“I’m actually more excited for the Buttons,” replied their pal.

NewFoodsUK told ED! they bought the Giant Buttons and the Orange Fingers for £1.95 each at Londis.

“The new range is currently available in Londis and Budgens stores. The range will be available in One Stop stores from mid-August and in Tesco from September.”

Which are you most excited to try? Tell us on our Facebook page @EntertainmentDailyFix.