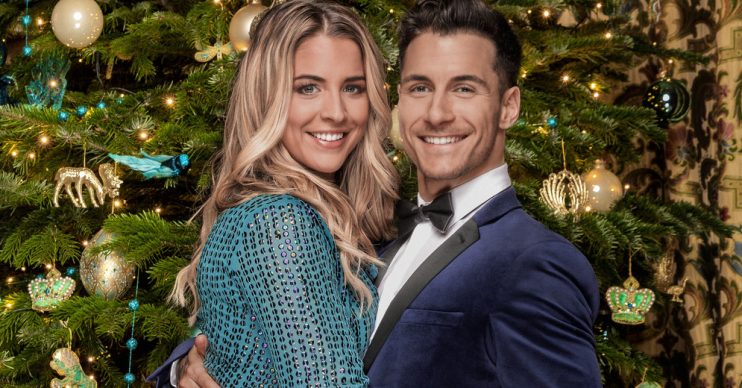 This year’s Glitterball trophy may well have been won, but there’s still plenty for fans of Strictly Come Dancing to look forward to.

As well as next year’s live tour, there’s also a very special festive edition of the show, which airs on BBC One on Christmas Day.

The show will see Gemma Atkinson dance with her boyfriend Gorka Marquez for the very first time.

In new pictures from the show, the pair are dressed in cute Mr and Mrs Claus outfits as they dance in a Christmassy sitting room.

In the background, hanging on the wall, you can see a framed picture of the couple cuddling up to their adorable daughter Mia.

Elsewhere, lovebirds Joe Sugg and Dianne Buswell are seen performing a series of crazy acrobatics as they dance dressed like a pair of candy canes.

Debbie McGee keeps it classy, as she dons a blue and white glittery dress to take to the floor with Kevin Clifton.

Chizzy Akudolu also returns to the dance floor – she can be seen rather impressively performing the splits alongside her partner Graziano Di Prima.

While Good Morning Britain‘s Richard Arnold channels his inner Piers Morgan as he is seen dressed as the Grinch as he dances alongside Luba Mushtuk.

People will like that they’re dancing with real-life partners – it adds another dimension.

Speaking ahead of the show, Debbie revealed that she really can’t call it when it comes to who will win.

“It’s not totally about dancing it’s about who the people like,” she said.

“People will like that they’re dancing with real-life partners – it adds another dimension,” she said, adding: “It’s anyone’s this Christmas.”

See who lifts the Christmas Glitterball trophy on the Strictly Come Dancing Christmas Special on BBC One on Christmas Day at 4.40pm.

Head to our Facebook page @EntertainmentDailyFix and let us know who you’re looking forward to seeing dance.