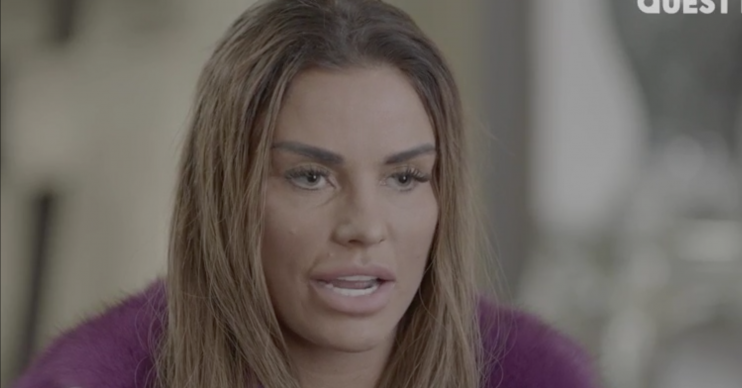 Model Katie Price has revealed that her former husband Peter Andre called her to offer his support when she was made bankrupt.

Speaking during an episode of her Quest Red reality TV show My Crazy Life, Katie called her mum Amy to tell her she’d been made bankrupt and made the surprise Pete revelation.

She said to Amy: “Who do you reckon rang me?”

When Amy said she had no idea, Katie told her it was Pete, who shares kids Junior and Princess with Katie.

The model added: “Pete rang me, saying: ‘Hi, I’m really sorry, I have just had a notification and heard the news, I don’t like to see you like this.'”

Pete, who split from Katie in 2009, recently revealed that he wished his ex “nothing but the best”.

He said: “She is the mother of my children so I will always wish her nothing but the best.”

Opening up on how she felt being made bankrupt, Katie said it feels like “closure” for her.

Pete rang me saying: ‘Hi, I’m really sorry, I heard the news, I don’t like to see you like this.’

“I’m actually really relieved,” Katie said, with her mum revealing that the bankruptcy could be a chance for her to “start afresh”.

“I’m actually gutted because I’ve worked so hard,” she told the cameras.

“Sh*t day, sh*t moment, but I just have to accept it,” she added on the show, which airs tonight on Quest Red at 10pm.

New reports suggest that Katie has now lost her so-called “mucky mansion” after it was signed over to a trustee as part of the bankruptcy order.