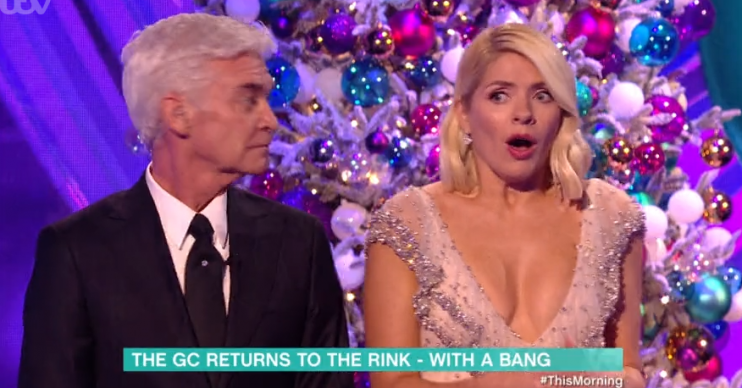 With the Dancing On Ice Christmas special just around the corner, Gemma Collins has revealed the moment she makes Holly Willoughby jump out of her skin.

The TOWIE star is appearing alongside Ray Quinn in the festive spectacular and it wasn’t long before The GC made her presence known.

Gemma, 38, showed a clip from the special and how she made Holly, also 38, and Phillip Schofield jump out of their skin.

She shared a clip with followers on her Instagram account, which showed Gemma bursting out of a Christmas present box.

Surprising Holly, who was talking to camera, Gemma exploded out of the box wearing a sparkly pink costume and tiara.

Holly jumped out of her skin at the surprise, putting her hands to her mouth and shouting, “Oh My God!”

Phil told her: “You may have come out a bit early then,” as Gemma then bent down into the box.

Gemma captioned the clip with, “SORRY Holly and Phil”, before plugging the show.

It’s going to be very special.

She finished her post with the words, “it’s going to be very special.”

It wasn’t long before many of her 1.5million followers commented on the clip.

“Hilarious!” one said while another wrote: “Was sooo funny to watch it all unfold.”

During an appearance on This Morning earlier this week, Gemma revealed a producer told her to jump out too early meaning Holly and Phil weren’t expecting the surprise.

Gemma explained: “Basically, I have to jump out a box and when we pre-recorded the show I jumped out so early that I nearly gave Phil and Holly a heart attack.

“It was nice to say this time, it wasn’t my mess-up or my fault.”