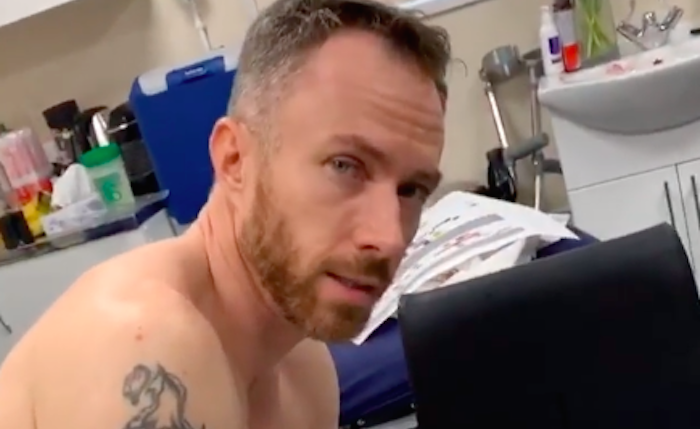 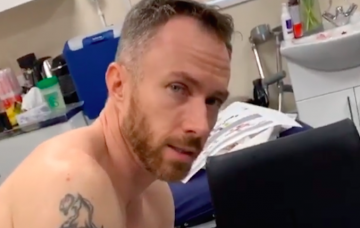 Dancing On Ice star James Jordan was left screaming in agony as medics put him through a gruelling physio session for an elbow injury.

In video footage posted on Instagram by his co-star Brian McFadden, the former Strictly Come Dancing professional was seen shouting as he sat bare-chested and held his arm in a bowl filled with water and ice cubes.

He continued to struggle visibly with the ordeal, which made his hand go numb and sent shooting pains up his arm.

Read more: James Jordan denies he will pull out of DOI because of injury

The treatment was being used to ease swelling on his elbow ahead of the live show later tonight. It’s not clear how James managed to hurt himself, although it’s likely he sustained the injury during rehearsals.

It follows an earlier injury from a botched jump during training.

The physiotherapist, who stood nearby with a grin on her face, ignored James’ screams and assured him it would help with the swelling and pain in the long run – as she pressed his elbow further into the freezing water.

Brian, who filmed everything, appeared to be of no help whatsoever. He even laughed and teased James while he squeezed his eyes shut and gritted his teeth.

James muttered: “I hate ice. I’m on Dancing On Ice… and I hate ice.”

But Brian joked: “Jack? Jack, come back!” in reference to the scene in the 1998 film Titanic, where Leonardo DiCaprio’s character freezes to death in the Atlantic.

On Strictly tonight, James is going to skate to The White Stripes’ Seven Nation Army. He’s partnered on the rink with Finnish pro Alexandra Schauman.

As a professional dancer, best known for his time on Strictly between 2006 and 2013, some say James is already equipped with the core skills that make a strong ice skater.

And now he’s looking to unseat Love Island star Wes Nelson from the top spot in the leaderboard.

It follows last week’s departure of TOWIE star Gemma Collins, who was the fifth celebrity eliminated.

Earlier this year, James revealed that he had a “big bust-up” with The GC at one point.

Speaking to Best magazine in January, James explained: “Gemma and I had a big old bust-up the other day – I felt she was in the wrong about something.

“She said, ‘You know what? You’re right.’ And she apologised to everyone concerned.

“That takes humility. What can I say… she gets carried away when she’s upset.”

Do you think James will overcome his injuries to perform well in tonight’s show? Leave us a comment on our Facebook page @EntertainmentDailyFix and let us know!