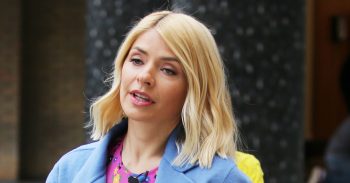 They said it looked like two dresses stitched together

Holly Willoughby’s fans didn’t know what to make of her latest dress on This Morning.

After the presenter shared a pic of her get-up on Instagram, fans bombarded the comments to tell her it looked like two dresses stitched together and asked if the maker somehow ran out of material.

One fan said: “Good to see all the curtains from the local charity shop went to good use.”

Another let rip with: “What a horrid dress… old fashioned look and looks like the maker ran out of material… the only place for that is a charity shop! Or the bin.”

A third asked, “Did they run out of fabric Holly?!” but then added, somewhat confusingly, “I love it!”

Someone else said it looks “like two different dresses got tangled in the sewing machine”, while a fifth called the garment “hideous”.

Others were quick to defend Holly, with one telling the rest: “If you don’t like her dress, don’t bloody comment. You look gorgeous as always Holly, love the dress.”

It’s the second time in days that fans have criticised Holly’s style choices.

On Thursday, Holly shared her outfit for This Morning on Instagram – a pink and white patterned blouse with a dusty pink suede skirt and a pair of white boots that she’s worn on a number of occasions.

Some loved her garb but others begged her to switch up her shoes and go for some other footwear.

It follows an awkward slip-up that left Holly redfaced on This Morning last week.

Holly was in New York earlier this month and fans were worried she might be moving to the US for a new TV job.

But as it turned out, she was there for a holiday rather than work, as her three kids were with her on a jaunt around Manhattan.

What are your thoughts on Holly dress from today’s This Morning? Leave us a comment on our Facebook page @EntertainmentDailyFix and let us know what you think.