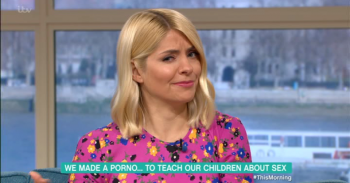 She called it a "bad choice of words"

Holly Willoughby was left red-faced when she made an awkward slip-up on This Morning today.

After a brief pause, she added: “Hmm, bad choice of word…”

The women, who all have teenage kids, want to create an adult film which promotes a healthy attitude towards sex.

Sarah-Louise recently admitted she was horrified by what she saw.

Speaking at a screening of the series, she told the Mirror: “It was a very small room, there was quite a lot of people. So unless you’ve got a ‘scratch and sniff telly’, you won’t get the experience that we got.

“It was really hot, there was a bit of a whiff going on and it felt a lot longer than 20 minutes. And it was quite aggressive, you don’t get to see the content, and it really turned my stomach. I don’t do gristle and her flicking bodily fluids…

“For me, it’s such a difference – I do pageants, peace and puppies and then this is like penises and [expletive]! Completely different from what I’m used to.”

The film the mums made will be shown in the final of the three-part series, which will begin on March 20.

The women worked with industry experts and were given all the tools they needed to make the movie.

They took control of the writing, casting, directing and editing of their teenage-friendly adult film.