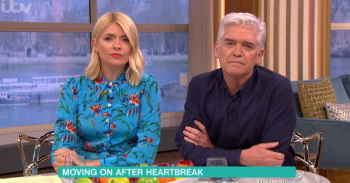 The viewer was struggling with a break-up

Holly Willoughby reached out to a This Morning viewer on today’s show, who called in because she was struggling with a break-up.

The woman, who went by the name Alice, rang in as part of the phone-in segment and admitted she’s finding it hard to accept her ex has moved on and found a new partner.

Alice told Holly, Phillip Schofield and Vanessa Feltz that her four-year relationship with her ex ended last year and he’s since moved on.

Alice explained: “I was in a relationship for four years and it was a long-distance relationship.

“This person gave 100% and was very loyal and was very confident. I did question the relationship because he was very outspoken and sometimes very arrogant – bit of a drama queen.”

Alice said she was sometimes “worried” about introducing her ex to her friends and loved ones because of the way he acted.

She revealed her ex then invited her round for Christmas Day because she was alone.

But when she arrived, she went to hug him, as they were still “close”, and he told her to “get off”.

Since then, Alice has struggled to get over the split as he’s moved on and she hasn’t.

Vannesa offered her advice, telling Alice: “Now he’s shown you loud and clear, he’s moved on. This is now something you are going to have to come to terms with.

“And it hurts like hell. But he’s moved on and you’ve got no choice. This is now where you start thinking about what you want in life and believe me it’s not this guy, who you were sometimes scared to introduce to your friends! Now your path is clear to find happiness.”

Alice then asked whether she had “made a mistake” in the relationship for it to have not worked out.

Holly chimed in: “Don’t do it. Your gut… that moment of not wanting to introduce him to people was you saying there was something you’re not happy with.

“You’re never gonna change that so this is it. A clean slate, a clean slate.”

As Phil asked Alice whether she could still be in love with her ex, Holly added: “I think in love with the idea of him.”