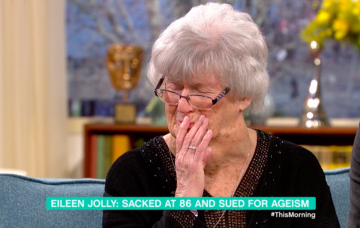 Grandmother breaks down in tears on This Morning discussing ‘ageist’ sacking

Viewers were left distraught, when This Morning featured an interview with an 88-year-old grandmother who cried as she opened up about losing her job over “age-ism”.

Presenters Holly Willoughby and Phillip Schofield looked emotional as former medical secretary Eileen Jolly described having “no idea it was going to happen,” and hiding the news from her dying husband.

Eileen, who is a mum of three and grandma to four, appeared on the morning show to discuss suing the NHS for age discrimination.

She explained how she had worked at Royal Berkshire Hospital for 25 years. She didn’t take a single sick day in the last 10 years, before she was suspended without warning and then sacked in 2016.

Even more tragically, while this was going on, Eileen’s husband was very ill and later died. Becoming emotional and covering her face, she revealed: “I had to put a good front on things because my husband was in indifferent health, so actually I never told him anything.” Phil explained: “Not until the day he died.”

The dad-of-two passed Eileen a tissue to wipe her eyes, as Holly added: “Oh Eileen, this must be incredibly hard, and you went through all this on your own.” Eileen whispered sorry as the presenters told her not to apologise and comforted her.

The lawyers, who were on the sofa with Eileen, explained how they won the case after discovering comments from Eileen’s colleagues. He explained: “[They] were very upsetting, to do with her age. One of them said they thought they would find her dead on the floor.”

Viewers watching at home rushed to praise her, with one commenting: “Eileen is an honourable and respectable employee who worked for the NHS, justice was done she won her tribunal.”

Another said: “Poor Eileen! Age has nothing to do with it, this is the bullying culture we have these days in NHS!! Bravo to her!!”

A third wrote: “@thismorning loved Eileen Jolly 86 years old and fighting for her rights!! I’m a HR Consultant and totally agree with the ruling if you’re good enough your age is irrelevant #ThisMorning #agediscrimination.” A fourth commented: “#ThisMorning god love Eileen, what a lovely lady and will done her for fighting for what is right.”

Others said it was typical bad behaviour from bad bosses, tweeting: “@thismorning unfortunately Eileen’s story is a prime example of how staff are treated by HR and managers!! I was an Occ Health nurse for 13yrs and the bullying is horrendous!!!”

A second praised Eileen directly, writing: “@thismorning well done to Eileen for being so brave. She is an inspiration. Great interview. Good luck with everything you do 😀.” While a third added: “My heart goes out to Eileen Jolly on #ThisMorning. Ageism is something that should not be tolerated or allowed.”

Eileen ended the interview by saying she wanted to do a wing walk on a plane. HERO.

What do you think of Eileen’s story? Leave us a comment on our Facebook page @EntertainmentDailyFix and let us know what you think.