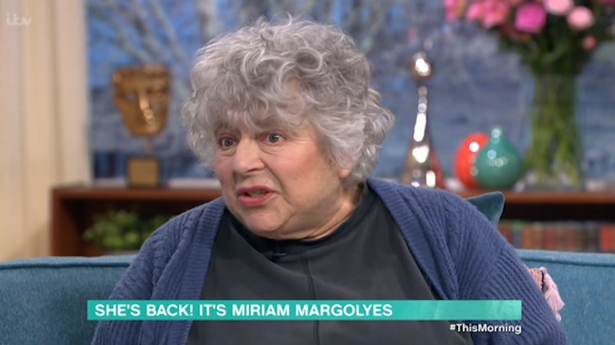 Call The Midwife star Miriam Margolyes SWEARS on This Morning

Miriam Margolyes dropped a four-letter expletive on This Morning, which left hosts Phillip Schofield and Holly Willoughby giggling in shock!

The Call The Midwife star, 78, was recounting the moment she had an embarrassing encounter with the Queen – and let the T-bomb drop like a clanger…

Touching upon the huge Royal news today that Prince Harry and wife Meghan are stepping down from being members of “senior Royalty”, hosts Phillip and Holly asked Miriam to describe the moment she herself met with the Queen.

The Queen turned to me and said: ‘Be quiet!’

She replied: “Well I have talked about this before on television, and I feel sort of awkward saying it again. But I was invited to the Palace as part of British Book Week.

As Miriam continued with the story, Phillip and Holly laughed to camera and mouthed “sorry” for her choice of words.

Miriam went on to say that the Queen had rolled her eyes at her, before moving on to the next person.

She added: “She immediately left me and went to the next person and asked ‘what do you do?’ He taught dyslexic children to read books with the use of different coloured letters.

“And I said standing next to him ‘really how fascinating’ and the Queen turned to me and said: ‘Be quiet!'”

The immensely likeable actress also revealed that she believes she was given the role of Mother Mildred in Call The Midwife because she has similarities to her character.

She explained: “She’s greedy, and bossy and quite outspoken.”

Talking about the Christmas special which was filmed in the Outer Hebrides, she said: “That is the most beautiful place I’ve ever been to.

Talking about the nun’s outfit, she said it was “awkward”.

She added: “When you go to the loo, you have to pull up everything to make sure it doesn’t go in the bowl. There’s a whole heap to pull up, it’s quite tricky. And you can’t hear what people are saying.”

But she insisted it’s “a joy to be on the programme” and “will be back” on the show after a leave of absence.

She also revealed she “wants to be Brenda Blethyn because she’s got Vera and I want a programme that is as good as that with a tough detective at the helm. I want to be an old lady detective”.

We want it too, Miriam!

Fans watching from home loved Miriam’s slip of the tongue, with one tweeting: “Miriam Margolyes saying [bleep] live on This Morning is everything.”

Another said: “Miriam Margolyes dropping the T-bomb on @thismorning. I want her at my next dinner party! Hilarious.”

A third typed: “I love Miriam Margolyes from @CallTheMidwife1. She cracks me up! Especially her interview on @thismorning.”

Miriam Margoyles recalling when she went to Buckingham Palace pic.twitter.com/ijtyHQeiSs

Miriam Margoyles dropping the T bomb on @thismorning
I want her at my next dinner party! Hilarious

Miriam lives in Australia with her partner Heather, but said the one show she wouldn’t do was I’m A Celebrity, insisting: “One thing I won’t do is go in the jungle. Cliff [Parisi] has just done it, and he’s lost a lot of weight.”

Would you like to see Miriam Margoyles as an old lady detective? Leave us a comment on our Facebook page @EntertainmentDailyFix and let us know what you think!