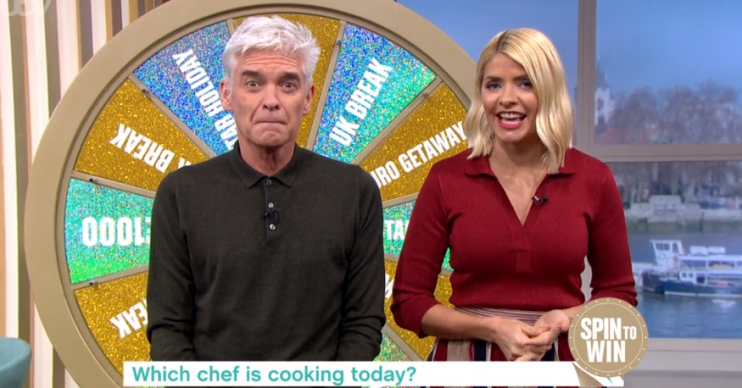 The presenter and co-star Phillip Schofield hosted their new segment, Spin to Win, in which they offered viewers a chance to win either money, a UK break, a European holiday or a special “star holiday”.

As Phil, 57, prepared to spin the wheel to see what the viewer would win, Holly asked: “Hard or soft, how do you like it?” obviously referring to the spinning technique.

Phil shut his eyes as the crew behind the cameras could be heard chuckling.

The viewer then confirmed she wanted a “hard” spin.

Meanwhile, viewers were left in hysterics at the beginning of the segment after a number of viewers failed to answer the phone to Holly and Phil.

The first caller answered but forgot to say the secret password meaning the duo had to hang up.

The next two callers failed to answer leaving Holly and Phil throwing their arms in the air.

Viewers shared their thoughts on Twitter with one amused person writing: “This is just an utter shambles haha.”

Another said: “Have Phil and Holly forgotten that people have to work rather than play Spin to Win?”

On Tuesday’s show, Holly and Phil were left in fits of giggles as unintentional rude sketches by young kids were shown.

One child had drawn an invention called the “ball licker” while another sketched what was supposed to be a “rocket launching” but it looked quite the opposite.

One picture that had Phil and Holly uncontrollably laughing was a drawing of a giraffe that one viewer’s daughter did after a visit to the zoo.

However, the giraffe’s legs looked very rude as Holly chuckled: “That’s my favourite.”