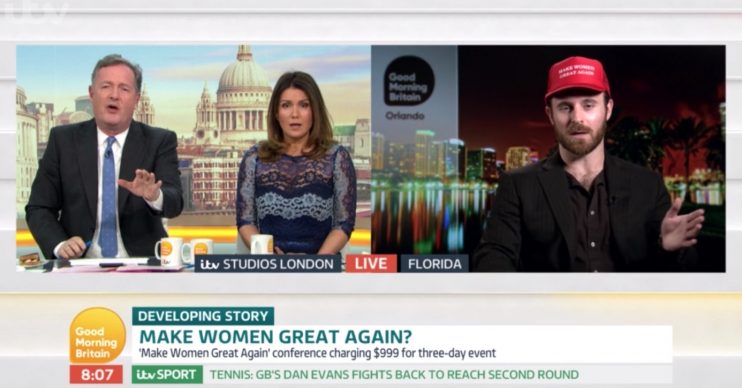 Says Piers would fit in

Daytime TV star Piers Morgan has once again clashed with a guest in an awkward exchange on today’s Good Morning Britain (20.1.20).

Piers and co-host Susanna Reid welcomed in Anthony Dream Johnson, who spoke about his upcoming ‘Make Women Great Again’ convention in the US.

But soon both Piers and Susanna were at loggerheads with the guest as he outlined his plans to ‘mansplain’ how to be the perfect woman.

He’s organising a three-day conference which he says will do just that. pic.twitter.com/scLUGMP4eV

Tickets to the event cost $999 and only women are invited, with Anthony claiming that ‘women should follow and men should lead’ in life.

Appearing on the show, Antony said that he was waging a ‘war against feminism’, which he said, “has to end immediately”.

He also went on to say that he was a big fan of Piers who, he said, “challenges feminism and wokenism”.

With that Piers looked put out, and replied that he only has a problem with the more radical elements of feminism, and identifies as a feminist in “what it should mean” – equality between men and women.

Piers then asked Anthony if he was single, which seemed to ruffle the activist’s feathers.

“Why do you think that is? No woman has bought into your sales pitch.

“Nobody wants to marry you or be with you it seems, why aren’t women racing to be with the guy who can tell them how to lead their lives?”

Hey, look, you want to get in my personal life, why are you being so nosy?

“Hey, look, you want to get in my personal life, why are you being so nosy?” snapped Anthony.

He then asked why Piers was so ‘judgey’, to which Piers replied that he was ‘the single most judgemental guest we’ve ever had’.

But Anthony pressed him on his own views, once again inviting to the convention.

“Piers, you should be a speaker at the convention. You’d be great. The women would love you,” he said.

Susanna then implored her presenting partner not to accept the invitation.