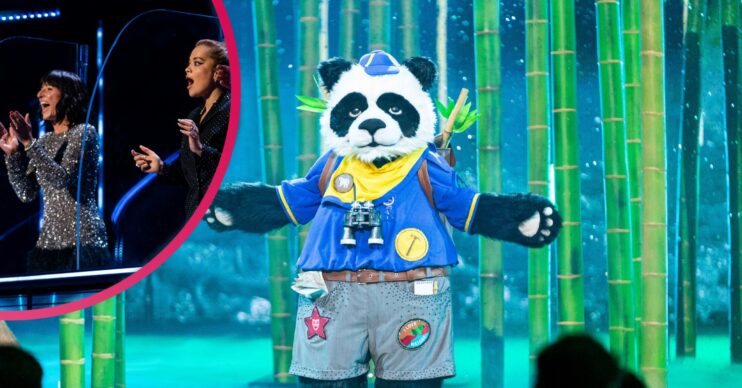 Who is Panda on The Masked Singer? Viewers convinced it’s big Hollywood star

Is Panda from the cast of Kung Fu Panda?

During The Masked Singer last weekend, Panda left us all bamboozled.

After their incredible performance, viewers were eager to figure out who is hiding behind Panda’s costume.

Before Panda’s rendition of Levitating by Dua Lipa, they shared a few clues about who they are in a VT.

Throughout the clue package, there were hints that Panda is adventurous and likes the outdoors.

They also shared that they were an “introverted extrovert”.

For their final clue they said: “This isn’t the first time I’ve been this animated.”

After lots of speculation on Twitter, many viewers are convinced that Panda is Alesha Dixon.

This is because Panda mentioned that this isn’t the first time they’ve been “animated” which might link to the cartoon Alesha voiced in Powerpuff Girls.

There was also a crate in the VT that said “Talent Show Musical Night” which might be a reference to Britain’s Got Talent, where Alesha is a judge.

Someone else shared: “I’d stick money on that being Alesha Dixon #MaskedSingerUK.”

However, some people are saying that Panda is actually Natalie Imbruglia.

Natalie Imbruglia is a British pop star with an Australian upbringing.

Fans of Natalie are so convinced that it’s her, that one person wrote: “If Panda isn’t Natalie Imbruglia, I’ll eat my Australian hat. #MaskedSingerUK.”

On Panda’s costume there is also a picture of a hammer, which fans think could be a nod to her single Build It Better.

Is Panda from the cast of Hollywood movie Kung Fu Panda?

After Panda revealed that it wasn’t the first time they’ve been animated, another theory circulated on Twitter that they might be Kate Hudson.

Kate has also admitted that she’s an outdoorsy person which has left viewers even more convinced that she is Panda.

Another fan said: “It has to be Kate Hudson. She played Mei Mei and I believe the character did a ribbon dance/ tap dance in Kung Fu Panda.

“Kate also said in an interview that she was a nature girl and loved the outdoors.”

What do The Masked Singer judges think?

After Panda’s impressive performance, the judges had to make a decision on who they thought the masked celebrity was.

Jonathan Ross thought that the outdoor clues was a reference to TV presenter Helen Skelton who is known for doing daring challenges across the globe.

Mo Gilligan also guessed that it might be Emily Atack who previously went on the hit ITV series I’m A Celebrity.

However, Davina McCall took a different approach and thought of “panda cars” which lead her to believe it might be Keeley Hawes.

Who do you think Panda is? Head to our Facebook page @EntertainmentDailyFix and let us know.