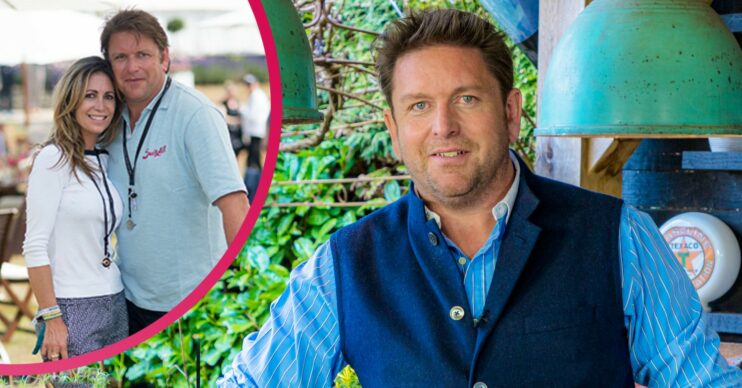 Who is James Martin’s girlfriend and why has Saturday Kitchen chef said he will never marry her?

James Martin is back on our TV screens with another Saturday Kitchen, but does he have a girlfriend he cooks for there?

How old is he and where are his restaurants?

Here’s everything you need to know about James Martin’s girlfriend, and his life beyond TV.

Where does he film James Martin’s Saturday Morning on ITV?

James Martin recently revealed that his Saturday Morning show on ITV1 is NOT filmed in his own kitchen.

Instead, the studio kitchen is situated in another part of the property – his garage!

Appearing on Lorraine earlier this year, he revealed: “We actually film in the garage which is quite fortunate in the [pandemic].”

He added: “The cars reverse out and the cameras come in.

“People don’t realise, but it’s the only way we could’ve possibly filmed anyway and I just so happened to build it in the garage because we use this as a test kitchen for me when I’m working on the restaurant side of it.”

His studio kitchen is a state of the art set-up, with top quality worktops made of stainless steel and the best cooking equipment money can buy.

James lives in an idyllic country village, the name of which he hasn’t revealed.

Until 2019, James lived in the Hampshire village of Stoke Charity, which is six miles from Winchester.

James Martin’s girlfriend: Is he single or married?

The TV chef has been in a relationship with his girlfriend since 2011.

They don’t have kids, but share a Lhasa Apso called Ralph, and a cocker spaniel named Cooper.

James has no plans to get married, he once revealed in an interview.

He told the Sunday People in 2019: “No, it doesn’t interest me in the slightest, mainly because I’ve catered for so many weddings, really.

“I admire people who do it, that’s fine, but I’m quite happy.

James met Louise when he participated in Celebrity Who Wants to Be a Millionaire in 2010.

Read more: This Morning: Phillip Schofield told off by mum for behaviour towards James Martin

Does James Martin have children?

James admits that his career has come between him and having a family.

He has said: “The sacrifices you make are huge. All my mates are married and have children.

“It was quite funny – my friends came over to my house last week, and we were walking through my garages when one of them said, ‘So this is what you could have had if you didn’t have kids’.”

Discussing whether he would want a family set-up, the chef said: “No. I’ve not got that and that’s fine. It’s a lifestyle choice.

“The sacrifices you make doing your job are colossal, but the rewards are huge.

“And I don’t mean financial, it’s in [your head and heart]. That’s what matters.”

James Martin was born on June 30 1972 in Malton, North Riding of Yorkshire.

He is currently 49 years old.

James’ family were farmers on the Castle Howard estate and he helped his mother in the kitchen, which started his interest in cuisine.

Where are his restaurants?

James opened his restaurant The Leeds Kitchen, inside the Alea Casino in Leeds in 2011.

However, the casino and the restaurant closed in March 2013.

In 2012, he opened a restaurant inside The Talbot Hotel, Malton, North Yorkshire.

The restaurant won a Michelin star at the end of 2012.

However, James Martin left The Talbot in February 2015.

There are four branches of James Martin Kitchen bakery and cafe.

You can find them in Stansted and Glasgow airports, inside Debenhams at intu Lakeside and at Manchester Piccadilly Train Station.

Who is Galton Blackiston?

Galton Blackiston is James’ friend, who appears on James Martin’s Islands to Highlands, which aired earlier this month on ITV.

He is the owner and chef patron of the Michelin-starred Morston Hall country house hotel and restaurant.

James Martin’s Islands to Highlands is available on ITV Hub.

Are you a fan of James Martin? Who is your fave TV chef? Leave us a comment on our Facebook page @EntertainmentDailyFix.