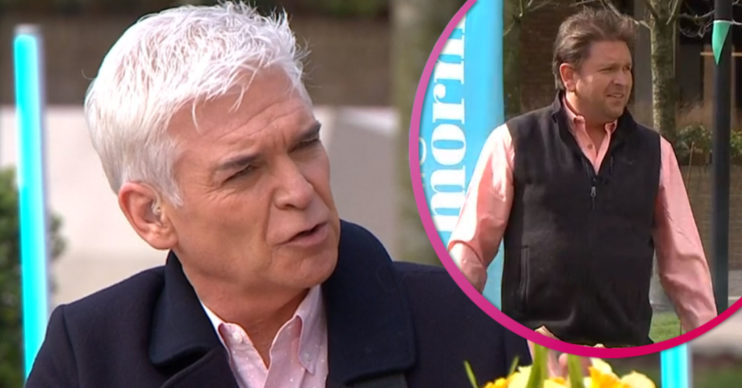 This Morning: Phillip Schofield told off by mum for behaviour towards James Martin

This Morning host Phillip Schofield has revealed his mum was “furious” with his “unprofessional” behaviour towards James Martin.

Last week, Phil and Holly Willoughby left viewers baffled with their strange antics during one of James’ cooking segments on the show.

However, on Saturday night, it was revealed it was all part of a Saturday Night Takeaway segment called On Air Dares.

In fact, Stephen Mulhern was behind the camera telling the pair what to say during the segment.

On Monday’s This Morning, Phil revealed his mum wasn’t happy with him after James’ cooking segment.

He said: “My mother was furious. She WhatsApped me after the show and said, ‘I don’t think I’ve ever said this to you before but I thought you were unprofessional to poor James.’

“There was a man on Twitter who said, ‘I’ve seen more mature cheese.'”

Phil told him: “You did brilliantly.”

There was a man on Twitter who said, ‘I’ve seen more mature cheese.’

It wasn’t just This Morning which faced On Air Dares for Ant and Dec’s Saturday Night Takeaway.

GMB, Lorraine and Loose Women were all instructed by Stephen during a segment on their Tuesday shows.

Stephen told the presenters they had to follow his orders with naughty cue cards and if they wanted to pass, they had to give a secret hand signal.

The four shows all went against each other to be crowned the winners of On Air Dares.

However, This Morning took the crown after Holly and Phil’s cheeky antics in James’ cooking item.

On Thursday’s programme (March 25), Stephen gatecrashed This Morning live on air to reveal they were the winners.

He told the hosts: “Stop! Stop what you’re doing! Let me tell you, I bring good news.

“This Morning, you are the winners of On Air Dares!” as he showed a mini trophy.

In addition, he added: “Listen everybody at home, I know what you’re thinking, this is madness.

“All will be revealed this Saturday on Saturday Night Takeaway.”

What did you think of the prank? Leave us a comment on our Facebook page @EntertainmentDailyFix and let us know.