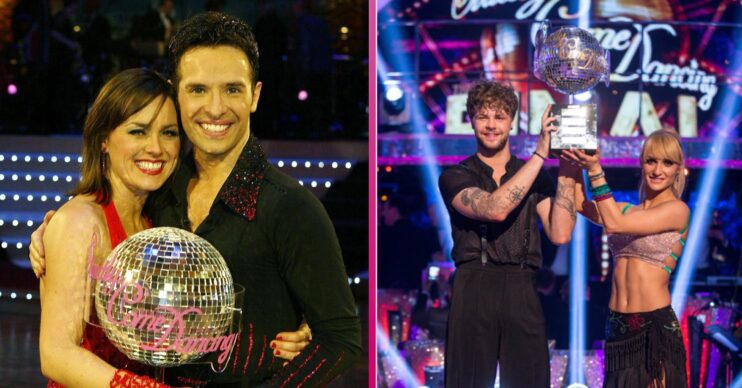 Who are all the Strictly Come Dancing celebrity winners and their professional partners?

Who will be crowned Strictly Come Dancing champion 2021?

The Strictly Come Dancing final is finally here – and soon we’ll find out who joins an illustrious list of winners.

After 13 weeks of blood, sweat and tears, the 15 original contestants have been whittled down to just two.

But who will be cha-cha-cha-ing away with the coveted Glitter Ball?

As AJ Odudu and Kai Widdrington pull out of the final due to AJ’s injury, it’s left to John Whaite and Rose Ayling-Ellis to battle it out to become Strictly champions 2021.

But who came before?

Here, we take a look back at the show’s previous winners since it was its first-ever series in 2004.

At the age of 55, Bill became the oldest winner in the history of Strictly.

His pro partner Oti Mabuse won the series twice in a row and achieved a Strictly first.

And who will ever forget their Rapper’s Delight routine?

Kelvin’s close friendship with Oti reportedly got him hot water with his wife Eliza Marsland after the pair were snapped late-night partying during the Strictly tour.

Our last-minute arrival has only gone and won the #Strictly Glitterball! Kelvin and Oti are your 2019 #StrictlyFinal winners! 👏🎉 @kelvin_fletcher @OtiMabuse pic.twitter.com/MZ27CGbyPA

The pair grew close while filming in the show, and in early 2019 Stacey parted ways with her boyfriend Sam Tucknott and began dating Kevin.

After splitting from his Strictly pro dancer wife Karen Hauer, he was single. Speaking to the Guardian about their relationship Stacey said: “What I am happy to say is Kev’s amazing; I’m happy, life happens.”

They’ve only gone and done it! Say hello to your #Strictly 2018 winners, @StaceyDooley and @keviclifton 🏆🎉 pic.twitter.com/C1pTKmW27O

After starting off as an outsider for the title, he became the first Scottish celebrity to lift the Glitter Ball.

He saw off competition from singer Alexandra Burke, Debbie McGee and actress Gemma Atkinson in the live final.

Sports presenter Ore broke down in tears when he was crowned champ alongside pro partner Joanne Clifton.

He beat off the bookies’ favourite actor Danny Mac and singer Louise Redknapp.

In the final, he topped the leaderboard scoring a near-perfect 39, 40 and 40 for his last three routines.

The Wanted singer Jay McGuiness was a firm favourite with judges and viewers from the start.

The pair were subject to romance rumours during the show, but both vehemently denied these.

The late Caroline Flack wowed with her Charleston alongside professional partner Pasha Kovalev in 2014.

She scored an incredible perfect 40s for all of her routines during the final, beating pop stars Frankie Bridge and Simon Webbe to the crown.

Pasha told ITV’s Lorraine: “I absolutely loved dancing with Caroline; she gave it everything.”

Abbey Clancy and her dance partner Aljaž Skorjanec were crowned the winners in 2013.

The couple were a firm favourite with judges and fans alike.

Speaking about her time of the show, Abbey called Strictly “the most perfect experience I’ve had”.

It was voted one of the top 10 Strictly dances of all time.

He was beaten in the judges’ scores by Denise Van Outen and equalled by fellow finalist singer Kimberley Walsh. But he won the public vote alongside professional partner Flavia Cacace to be crowned champion.

Louis retired from gymnastics in 2018 and headed for the West End stage. He said Strictly “opened doors for him”.

McFly’s drummer Harry Judd and dance partner Aliona Vilani glided off with the Glitter Ball in 2011.

The couple impressed judges with their Argentine Tango and topped the leaderboard in the final.

Former EastEnders star Kara Tointon was an early favourite with judges and fans in 2010.

She beat TV host Matt Baker and performer Pamela Stephenson in the final to take home the Glitterball.

It also helped that she shared chemistry with her partner Artem; the couple started dating during their time on Strictly. But they announced their split four years later in 2014.

Throughout the series, Chris never once ended up in the dreaded dance-off.

Actor Ricky Whittle was the favourite to win the show with his dance partner Natalie Lowe and actually scored more points than Chris in the final.

But Chris triumphed in the public vote to beat Ricky and actress Ali Bastian and her partner Brian Fortuna.

He cancelled his honeymoon to compete in the final and beat former S Club 7 singer Rachel Stevens and model Lisa Snowdon to claim victory.

Controversially Tom scored the lowest of the three finalists on the night. But his popularity ensured he won the public vote.

Many would argue that winning the Strictly title in 2007 was the making of Alesha Dixon’s career. At the time, she was best-known as a former singer in the girl band Mis-Teeq.

She jived her way to victory with dance partner Matthew Culter beating actor Matt Di Angelo by just two points on the leaderboard.

The singer impressed producers that much that she swapped her dancing shoes for the judging panel just two years later. She controversially replaced choreographer Arlene Phillips.

Mark Ramprakash set the ladies heart aflutter when he became the second England cricketer in a row to be crowned Strictly Come Dancing champion, after Darren Gough’s victory in 2005.

The sportsman and his pro partner Karen Hardy were the only couple in the entire series to achieve a score of 40. But only narrowly beat rugby star Matt Dawson and his partner Lilia Kopylova in the final.

During their stint on the show, they never once topped the leaderboard. And Darren become the first male celebrity to win Stritcly.

Actress Jill Halfpenny and pro partner Darren Bennett beat off stiff competition from comic Julian Clary and Olympic gold medalist Denise Lewis to waltz away with the Strictly crown in 2004.

Jill still holds the highest score for a Jive in Strictly history, scoring a perfect 40 points from the judges.

Read more: Strictly fans all have the same complaint about Janette Manrara’s appearance on It Takes Two

The first-ever winners of Strictly Come Dancing back in the summer of 2004 were newsreader Natasha Kaplinsky and her professional partner Brendan Cole.

Natasha and Brendan beat former EastEnders star Christopher Parker and Hanna Karttunen to waltz away with the Glitterball.

The couple were the subject of the first Strictly Curse after rumours of an alleged fling surfaced.

Brendan then famously split from his fiancee of eight years, Camilla Dallerup, also a dancer on the show. The pair both denied an affair.

The Strictly Come Dancing Final airs on Saturday 18th December on BBC One at 7pm.

Who has been your favourite Strictly Come Dancing winner? Leave us a comment on our Facebook page @EntertainmentDailyFix and let us know what you think!