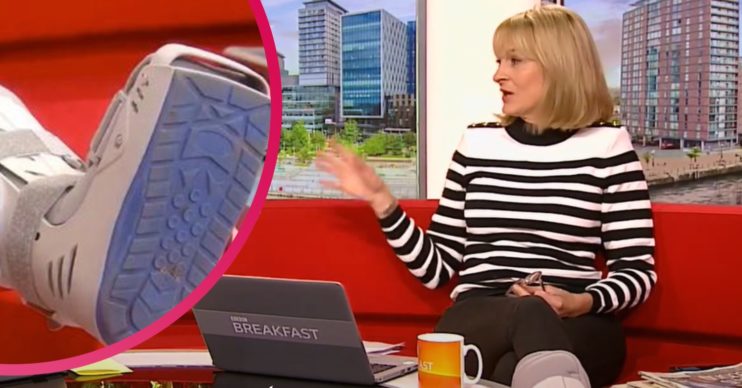 What has Louise Minchin done to her foot? BBC Breakfast star returns after shock injury

BBC Breakfast presenter Louise Minchin made her comeback today. But what has she done to her foot?

The BBC star, 52, returned to the red sofa alongside her co-star Dan Walker on Wednesday, much to viewers’ delight.

However, she returned wearing a foot cast.

Thankfully, Louise proved that her painful injury hasn’t had an impact on the presenter’s cheeky sense of humour.

What has Louise Minchin done to her leg?

Showing off the cast on her foot, she told viewers: “I’ve had a foot operation to fix it, it is now on the mend. I’m still on crutches but I’m getting stronger every day.”

She then thanked her co-star Carol for her support, and made a cheeky jibe at Dan.

“Carol has been so sweet to me, we’ve been in touch,” she told viewers.

“I really appreciated your messages and yours Dan… but particularly Carol’s.”

Louise also marked her return with a post on social media showing off her crutches.

Goood morning, I am back on #BBCBreakfast with new footwear and @mrdanwalker is feeling my pain! pic.twitter.com/FtlCglBeSM

She wrote: “Good morning, I am very glad to be back on BBC Breakfast with my most elegant boot.”

Fans rushed to welcome the star back to their screens.

“SO pleased to see you back!!! You two are my favourite morning faces!” replied one fan.

“Welcome back Louise! We’ve missed you!” another added.

Louise’s injury happened almost two years ago, when she broke a bone in her foot without realising.

Dan Walker hits back a trolls

Meanwhile, fans rallied around Louise’s co-star Dan back in October after he was attacked by trolls online.

He told his followers: “It’s one of those (increasingly common) mornings when all sorts of vile insults and accusations have been thrown around on here. Thanks for watching #BBCBreakfast!”

Worried fans rushed to reassure Dan and advise him to not to take trolls seriously.

“The people on here do not represent the vast majority of the U.K., most of whom are kind, decent people. Just remember, you have a good heart and compassion and that’s what counts.”