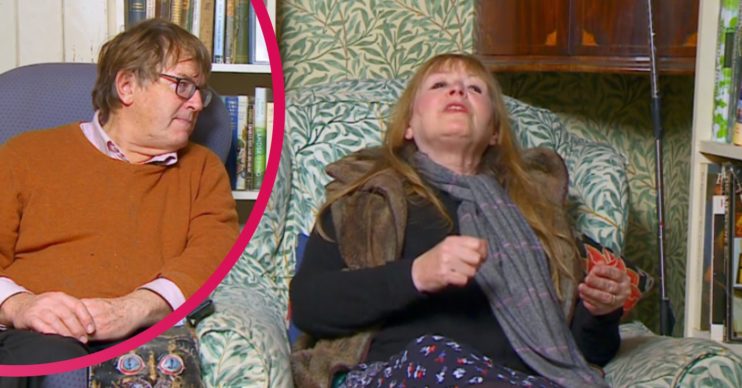 Fans think Giles 'enjoyed it too much'

Gogglebox stars Giles and Mary had viewers in stitches last night as they watched Nigella’ Cook, Eat, Repeat – but some claimed they had had enough of the pair.

What did Gogglebox stars Giles and Mary say about Nigella?

They got to talking about how suggestive they found Nigella’s descriptions of the food she was cooking.

And when Mary broke into an impression of the culinary whiz, she joked that Nigella could even make washing the dishes sound sexy.

Pretending to be Nigella, she said in a deliberately slow voice while Giles watched on: “The next show will probably be just her washing up and saying, ‘I really enjoy the sensuous bubbles, and the way the warm water rushes over the plates.

“And then I like to stack them to just dry, before I dry them with a cloth… a linen cloth.”

What did Channel 4 viewers think of Mary’s Nigella impression?

And on Twitter, those watching at home were in hysterics. Some even suggested Giles appeared to like what he saw ‘rather too much’.

Mary, you could definitely make some money doing naughty talk on the telephone.

One said: “Mary’s impression of @Nigella_Lawson on Gogglebox has me in stitches.”

A third put: “I can’t get enough of Mary’s #nigella impressions. Hilarious! #Gogglebox.”

I can’t get enough of Mary’s #nigella impressions. Hilarious!#Gogglebox

A fourth wrote: “Forget Nigella – Mary, you could definitely make some money doing naughty talk on the telephone.”

“I was laughing by how excited Giles was, lol,” said a fifth, adding: “He was into Mary as Nigella #Gogglebox.”

Someone else said: “Mary, me thinks Giles enjoyed your rendition of Nigella rather too much, you little minx, you #gogglebox.”

“Mary just showing her saucy side tonight,” said another.

However, on Twitter some viewers moaned that they had had enough of the couple.

“Is anyone else get fed up with the way the Mary talks to Giles or is it me?” demanded one.

“Too much Giles and Mary tonight,” said another.

“Sorry but Mary and Giles just make me feel uncomfortable,” someone else complained.

#gogglebox too much giles and mary tonight

too much of Giles and Mary tonight #Gogglebox pic.twitter.com/Zd1dJldlky

What else happened on Gogglebox?

Giles and Mary also went through their Christmas decorations, and when Giles said “ting-a-ling” to describe the sound of a bell, Mary told him off as she found it ‘not masculine’.

In another scene, Mary stunned Giles by saying men would want to be a potato so they could ‘be inside’ Nigella.

Elsewhere on last night’s Gogglebox, the final episode in the series, the stars screamed and covered their eyes as they watched a group of men catch huge snakes in Floria.

They also got emotional watching coverage of the COVID-10 vaccination rolling out, with Jenny Newby wiping away tears.