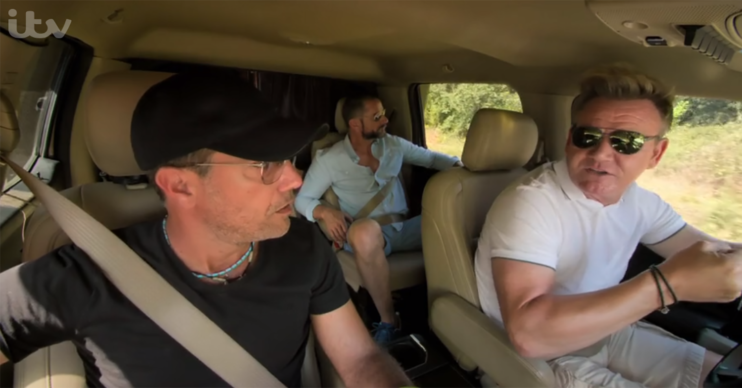 Will there be a new series of Gordon, Gino and Fred? ITV announces trip to Kathmandu

The fourth and final episode of their American Road Trip aired last night (April 24) as they travelled around Texas.

Fans of the show were miffed that the series has been so short, at just four episodes?

Even though the series has finished, ITV has confirmed the trio will be returning to our screens for another one.

At the end of last night’s show, Gordon, Gino and Fred sat on their RV Betty in Texas and discussed their next adventure.

They each wrote a destination on a dollar note and put it in a cowboy hat.

Only 4 episodes, can’t we have more please!!

Gordon then pulled out one to reveal the next place they’ll be road tripping around.

He exclaimed: “Yes! That is a dream come true. I’ll see you in Kathmandu.”

Gino added: “The next trip boys. Where the [expletive] is Kathmandu?”

Viewers were gutted to see the series end and shared their thoughts on Twitter.

One person wrote: “So gutted it’s over. @fredsirieix1, @Ginofantastico & @GordonRamsay, what a show! Can’t wait for the next one.”

Another said: “Love #GordonGinoAndFred. Fab series. Been one of my highlights during lockdown… Kept me laughing! Sad it’s over.”

However, ITV has announced there will be a brand new series.

The network said on Twitter: “Gordon, Gino & Fred WILL RETURN for another road trip.”

Viewers were thrilled, of course, but many had a stern waring for the network.

Another tweeted: “Petition for ITV to give us more episodes of #GordonGinoandFred next time.”

Make it at least 6 episodes, 4 is far to short!! Send them to asia lol

Petition for ITV to give us more episodes of #GordonGinoandFred next time pic.twitter.com/4BPOwJQoYT

One added: “Why is it such short adventures??? Only 4 episodes, can’t we have more please!!!”

Why is it such short adventures??? Only 3 episodes, can't we have more please !!!

Let’s hope ITV listens to everyone!

Last night’s show saw Gino flash his bare bum as he joked he was risking an arrest.

Fred read out the definition of indecent exposure offences.

He said: “You may commit an indecent exposure offence when you expose your anus or part of your genitals.”

Gino turned around and pulled his shorts down as he said: “Arrest me, not arrest me.”

How we didn’t get arrested in this series I’ll never know ! UK, It’s the finale of #GordonGinoandFred tonight at 9 PM the on @itv from Texas !

Will you miss the show? Leave us a comment on our Facebook page @EntertainmentDailyFix and let us know.