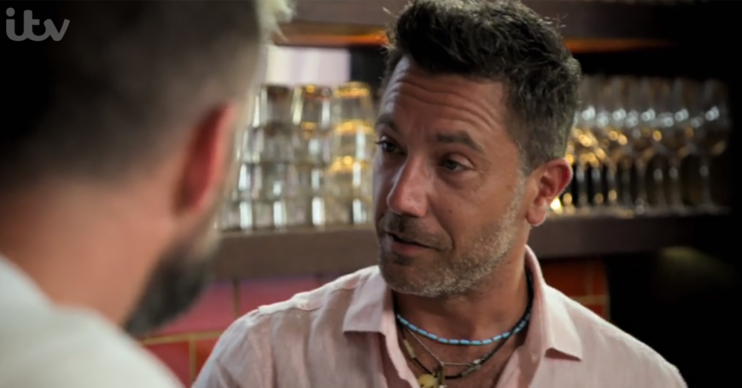 Viewers divided over ‘irresponsible’ scenes of Gino D’Acampo ‘getting high’

He tried a range of cannabis infused foods and drinks

Gino, Gordon Ramsay and Fred Sireix are travelling around Mexico and the United States in the  programme.

It was marijuana infused tea and was served with cakes and sandwiches.

Gordon opted not to try the tea and instead had PG Tips, however, Gino and Fred decided to have a cup.

Gordon stuck with a simple cucumber and mint sandwich.

Gino said: “I’m going with this one because I don’t like cucumber,” as he added a drop of THC oil – which gets you high – to the sandwich.

Speaking about the sandwich, he added: “To me this is different, it’s exciting. It’s new, it’s modern and fashion.”

Gino then added more drops to his sandwiches.

Gordon said: “Can you slow down because you’re going to be like a hot air balloon in a minute.”

The trio then tried smoked salmon mousse on rye toast, which Gordon insisted tasted “delicious all on its own”.

However, Gino added three drops of the THC oil to the snack.

He told his co-stars: “I do this one because I want you to experience.”

Gordon laughed: “You’re slurring your words, are you okay?” to which Gino said: “No, it’s fine. There is no effect, I’m fine.”

Gino then starts giggling and asked Gordon: “Can I have some water?”

He even put his head under a tap!

As they left the shop, Gino jumped onto a motorcycle in the street and pretended to ride it as Gordon and Fred told him off.

Viewers weren’t impressed with the scenes and criticised ITV for showing Gino getting high.

Another wrote: “Absolutely disgusted by @ITV for making it out like drug use is ok on #GordonGinoandFred.

“Places like Scotland have serious issues with drugs, with over 60,000 problem users.

“The last thing Scotland needs is celebrities promoting and taking drugs on your show. Shameful.”

Absolutely disgusted by @ITV for making it out like drug use is ok on #GordonGinoandFred. Places like Scotland have serious issues with drugs, with over 60,000 problem users, and the last thing Scotland needs is celebrities promoting and taking drugs on your show. Shameful

One tweeted: “@ITV shame on ITV for showing this on their station it’s pointless and has nothing to do with food.

Others were amused by Gino’s antics.

So funny! Gordon is basically the disapproving Dad. Gino is a nutter #GordonGinoandFred

#GordonGinoandFred made me laugh out loud last night .. Gino and the drops 😂😂 so funny .. Gordon is such a dad isn’t he 🤪 and Gino and Fred the giggling boys .. brilliant guys just what we need 😊❤️

What did you think of the scenes? Leave us a comment on our Facebook page @EntertainmentDailyFix and let us know.