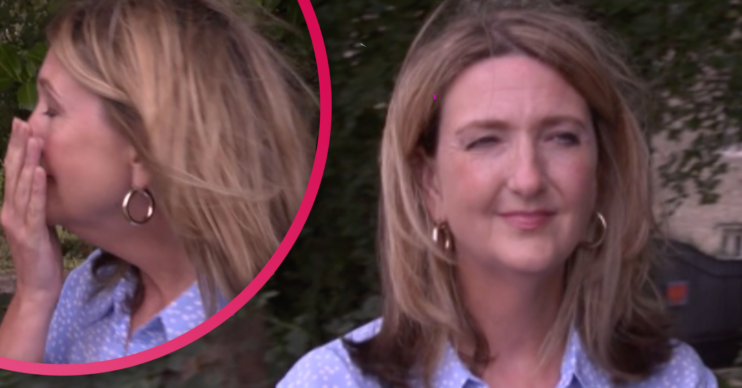 BBC's Panorama: Escaping My Abuser sees the presenter return to her childhood home

In a Panorama special that airs tonight, Victoria Derbyshire recalled how her dad used to beat her mum in a series of terrifying attacks when she was a child.

The 51-year-old admitted she faced some “really difficult times” while living with her violent father during a new BBC documentary.

In tonight’s episode of Panorama: Escaping My Abuser, Victoria opens up on her turmoil while standing outside her childhood home in Rochdale, Lancashire.

She says: “When the prime minister told us all to stay at home because of coronavirus, one of my first thoughts was for those living in abusive households – women, men and children, essentially trapped, forced to stay inside week after week. What would happen to them?

“Growing up, I remember my whole body tensing every time I heard my father’s key in the back door. What mood would he be in when he came home from work?

Growing up, I remember my whole body tensing every time I heard my father’s key in the back door.

“Would he provoke an argument? Would it lead to him hitting me, whipping me with his belt or just slapping me round the back of my head?”

Victoria goes on to reveal how she once contacted the police following one of her dad’s violent outbursts.

‘I was so scared’

The TV star continues: “I remember once, he locked my mum in their bedroom and he was hitting her and there was loads of noise and I was scared.

“So I ran from here down to the police station which was, I don’t know, maybe a mile or something?

The visit marked the first time Victoria had returned to her childhood home in 35 years.

📺@vicderbyshire was 16 when her family left their home, the place she had experienced violence at the hands of her father.

Thirty-five years on, she returns to look at how those living with #domesticviolence have been impacted by #lockdown.#BBCPanorama https://t.co/eRzIQIswT9 pic.twitter.com/UgDu9nJxrN

On Twitter, Victoria thanked the “courageous” guests who spoke to her during the documentary process.

She wrote: “Thank you SO much to the courageous people who spoke to us about their experiences, and to the domestic abuse workers on the ground who were under such pressure during lockdown.

“You are incredible. ‘Escaping my abuser’, tonight’s @BBCPanorama 7.30pm @BBCOne.”

In April, the star showed her support to those suffering in lockdown by printing a domestic abuse helpline on her hand while presenting the news.

You can catch up with the documentary on BBC iPlayer.