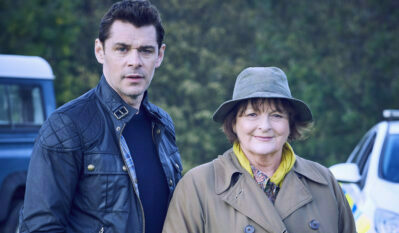 Kenny Doughty is back on our screens in ITV detective drama Vera tonight.

But who is Kenny when he’s not appearing as DS Aiden Healy, the sidekick to Brenda Blethryn’s Vera Stanhope?

Yorkshireman Kenny has appeared as a central character since joining the show in 2015.

Kenny is from Barnsley, South Yorkshire and celebrated his 46th birthday in March.

Raised by a single mum, Kenny describes himself as a ‘mid-forties working class man’.

The Vera star is also a huge football fan and supporter of Manchester United.

Who’s the famous actress he’s been linked with?

Kenny was reportedly still married to actress and screenwriter Caroline Carver in March.

But this summer he was spotted dining out with his former Love, Lies and Records co-star Ashley Jenson, in Bath, close to the actress’s home.

According to witnesses Kenny and the Extras actress were openly affectionate and walked along ‘giggling and holding hands’.

Scottish Ashley was left heartbroken after the death of husband Terrance Beesley, who died by suicide in 2017.

Kenny is the first person she has apparently publicly dated since The Bill actor’s death.

A source reportedly told The Sun newspaper: “They make a lovely couple, and all their friends are absolutely delighted for them. Ashley is both a wonderful actress and person — and she deserves this second chance at happiness.”

What has Kenny said about his Vera role?

Kenny says he loves playing Aiden, but the highlight of working on Vera is acting alongside Brenda Blethyn.

While speaking to Virgin Media, he said: “Brenda has created such an iconic, truthful character that everyone loves.

“She’s the standard-bearer of the show. We all come back with passion and vigour to do even better, and that’s 100% down to Brenda.”

How did Kenny get into acting?

Kenny says he got into acting after being mercilessly bullied in school.

Raised by his single mum, he says kids picked on him for being ‘poor’.

Speaking to The Yorkshire Post, he explained: “Going to the playground in breaks became a nightmare.

“Then I heard that one of the teachers was going to put on a school play. As an escape, I asked if I could join in the rehearsals.

“And I discovered that I rather liked it – firstly because it got me out of reach of the bullies, and secondly because I enjoyed the creativity.”

What else has Kenny Doughty been in?

Kenny has a lengthy TV acting career that spans back to 1998.

He’s also appeared in various stage shows, including as Gaz in 2013’s national tour of The Fully Monty.

During an interview with Broadway.com, Kenny joked of how enthusiastic the audience were.

Kenny said: “At our first preview almost a year ago in Sheffield, we had no idea how the audience might react, and I think we were slightly like lambs to the wolves.

“The audience was so raucous that it was genuinely terrifying when we got out there. When we were in Dublin, they were stomping ‘get them off’ at one point, but we just had to hold our ground!”

Does he have any children?

She is particularly known for her roles in The Aryan Couple, Holby City and My First Wedding.

But it is unknown if they have any children.

What’s next for Kenny Doughty?

However, given Kenny’s already long lasting acting career we doubt it will be long until he’s announcing an exciting new role.

When is Vera next on?

A repeat of Vera airs on ITV at 8pm on Thursday, December 30.

Past episodes are available to stream on ITV Hub.