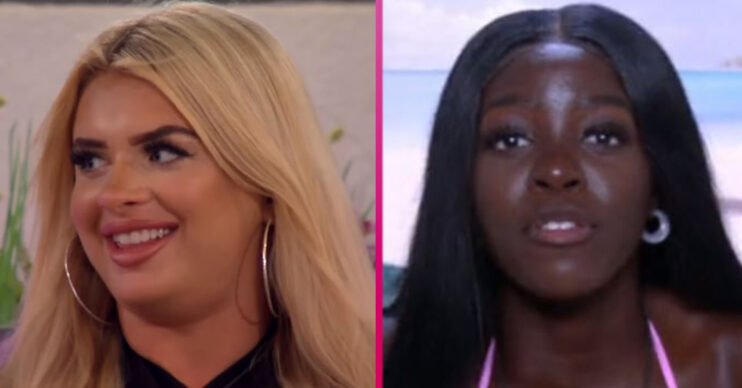 Friendship for the win?!

Twitter has spoken and Love Island stars Kaz and Liberty should be the real winning couple this year.

Last night’s episode saw the Islanders vote the two couples who they believe are the least compatible.

Liberty’s relationship with boyfriend Jake became the centre of attention as some of the girls and viewers questioned his timing of dropping the L-bomb to her.

Many viewers aren’t convinced that he’s in love with Lib, and some are saying he’s not “genuine”.

Others are insisting that best friends Kaz and Liberty should just win the £50,000 prize after spotting their close bond.

One person said on Twitter: “Can Liberty and Kaz couple up so they can win the 50k?”

Another wrote: “Can Kaz and Liberty win #loveIsland together? [Bleep] the men, let that friendship win.”

A third tweeted: “Kaz and Liberty should win. Forget the men.”

A fourth added: “I genuinely believe that if Kaz and Liberty recouple together they will win.”

Meanwhile, Liberty and Jake are at risk of being dumped from the villa after being voted one of the couples who are least compatible.

They join Mary and Aaron, Priya and Brett and Faye and Teddy.

But many viewers are torn, with many wanting to see Jake go but not Liberty.

One added: “I want Jake to go but I don’t want liberty to go.”

Another said: “I want Jake gone but I don’t want Liberty to go.”

A third tweeted: “Liberty doesn’t deserve to go home but I want Jake to.”

Elsewhere, Jake came under fire by the girls last night after telling Liberty he loved her.

As Liberty excitedly told the girls, Chloe told her: “You’re going to hate me. Do you not think he’s telling you what you want to hear?”

Faye agreed, and walked away from the conversation.

Jake later pulled Faye for a chat and she and Chloe told him their true feelings.

Faye told him: “We have all noticed you have been distant with her. She has felt a bit insecure and you’ve done absolutely jack [bleep] to reassure her.”

What did Jake say?

Jake replied: “That’s not the way I wanted to tell her, in my mind I wanted to do a big gesture. But I always be honest.

“I’ve never told her how I felt. I get scared to tell my feelings because if I get [bleep] over. That’s just me.”

Some viewers felt for Jake, as one said on Twitter: “Think I’m only person who feels for Jake, he literally can’t do anything right.”

Another wrote: “I feel sorry for Jake, he doesn’t deserve all this. Let’s not forget to be kind to each other!”