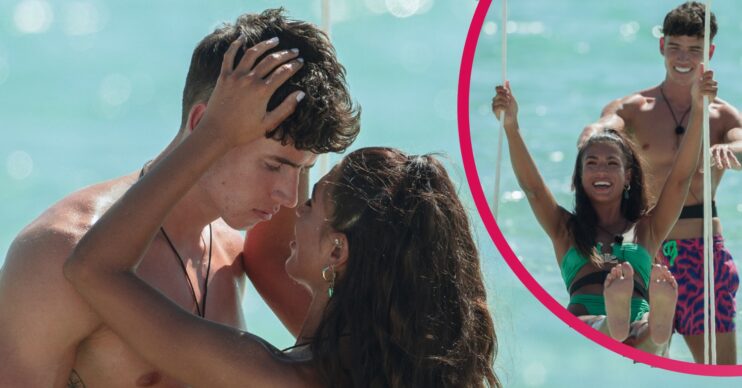 Six months on and these two are going strong...

It’s official – Cam and Emily are still together after finding love on Too Hot To Handle.

The British lovebirds became a major talking point as their randy antics cost the group thousands from the prize fund.

But it seems Lana’s magic to form more meaningful connections worked. With the couple even declaring they loved each other by the show’s ended.

But what happened next? Here’s everything you need to know.

What happened on Too Hot To Handle?

Cam and Emily’s chemistry was electric from the first day – and even when AI robot Lana banned everyone from sex, they couldn’t resist each other.

In fact, they became the biggest rule breakers – racking up a massive $17,000 between them during their stay there.

On one of those occasions, Cam tried to ‘relieve himself’ in the shower in a bid to stop breaking rules, but it didn’t work.

Read More: Too Hot To Handle season 2: Are Robert and Christina still together?

However, through Lana’s workshops and their increased time spent together, the pair began to calm down.

In fact, they actually became the most well-behaved by the end of the series.

Cam’s improvement was so impressive he became one of the show’s finalists – but lost out to Marvin in the final vote.

He didn’t seem to mind though, and in the final seconds of the series, he confessed that he was in love with Emily.

Read More: Did Marvin and Melinda last after Too Hot To Handle season 2?

What are Cam and Emily up to now?

Since the series filming ended six months ago, the couple are going from strength-to-strength, and are now even living together.

While they had to hide their relationship on socials for the duration of the show, they finally came clean during the reunion special.

“We came home, she came to mine for a bit, and then I basically packed everything up and moved in with Em. We haven’t spent many days apart since the show,” Emily said.

“We’re essentially like a little married couple now, we know everything about each other.”