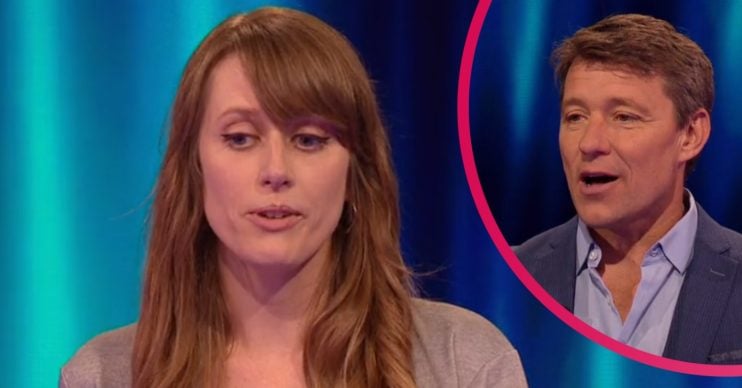 The Londoner made it to the final

Tipping Point contestant Georgie shocked fans of the ITV quiz show after revealing how she would be spending her prize money.

Georgie, a copywriter from London, was one of four contestants who joined host Ben Shephard in the studio during Thursday (January 21) afternoon’s episode.

What happened with Georgie on Tipping Point?

Before they went ahead, presenter Ben said: “You battled hard, dominated at the end of that round, and here were are about to take on the machine for our jackpot.

“If we were to get it out, what do you think you’d like to do with the money?”

What did Georgie say about spending her winnings?

Georgie then revealed she owes her boyfriend money in the form of rent.

“Well, I owe my boyfriend some rent… so that’ll be really good because, you know…” she said, in light of her current winnings.

However, she did have aspirations for how she planned to spend the jackpot, if she won.

“Really, the two of us would like to go travelling around Europe for a few months,” the hopeful explained. “We’re thinking of getting a little car and fixing it up and pootling.”

Ben was impressed, as he said: “Oh wow, just have a lovely adventure? Amazing.”

Unfortunately, as the rest of the game played out, it dashed Georgie’s hopes of a big trip around Europe in a fixed-up old car.

She did manage to increase her prize pot, to £2,250, but the potential five-figure jackpot winnings evaded her.

Ben said: “That’s so frustrating because it hasn’t quite gone to plan, that jackpot counter… given [where the jackpot counter] is, and you owe your boyfriend a load of rent… would you like to take the money or the trade?”

“I’m going to take the money,” Georgie said. She also joked her boyfriend might only get some of the money he’s owed, as she added: “And maybe give some of my rent to my boyfriend.”

What did Tipping Point viewers say?

It surprised viewers on Twitter, as one wrote: “I wonder how much rent she owes? Her boyfriend right now, alongside a GIF that read ‘Show me the money!’

Another advised: “You owe your boyfriend some rent? You go dump his [bleep], girl. He ain’t nooooo good, honey. #TippingPoint.”

‘I owe my boyfriend some rent’ – imagine announcing that on national TV.

A fourth joked that the boyfriend would be angry, knowing he isn’t getting all his rent, alongside a GIF of someone raging.

A fifth said: “‘What do you want to do with the money?’ ‘Well I owe my boyfriend rent.’ DUMP HIM, Georgie, #TippingPoint.”

A sixth wrote: “Anyone else find it weird she owes her boyfriend rent #tippingpoint.”

“‘I owe my boyfriend some rent’ – imagine announcing that on national TV,” said one.

Another put, with a shocked emoji: “Owe your boyfriend rent?”

I wonder how much rent she owes? Her boyfriend right now #tippingpoint pic.twitter.com/NWkFP0y1It

Boyfriend now he knows the rent isn’t being paid in kind #tippingpoint pic.twitter.com/FvNeVEoWA2

What do you want to do with the money? Well I owe my boyfriend rent” DUMP HIM Georgie 😂😂😂 #TippingPoint

What did you think of Georgie on Tipping Point? Leave us a comment on our Facebook page @EntertainmentDailyFix and let us know.