Holly Willoughby and Phillip Schofield collapsed into giggles on Monday's This Morning, and viewers at home couldn't help laughing along with them.

Today (November 18), the likeable pair were left in tears of laughter during what should have been a reasonably serious shopping segment with Alice Beer. 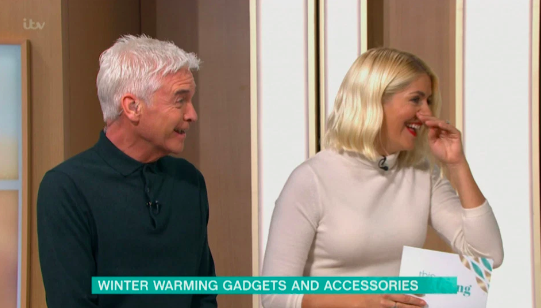 Phil and Holly struggled to compose themselves (Credit: ITV)

Consumer specialist Alice appeared on the show to talk through some of the 'winter warmer gadgets' that might hopefully help viewers get out of bed on a winter's morning.

From full-body hot water bottles to the latest heated duvets, Alice talked the presenting duo through different ways of keeping warm wherever you are this winter.

You're digging yourself a massive hole and you're throwing us all in it.

So far so sensible... 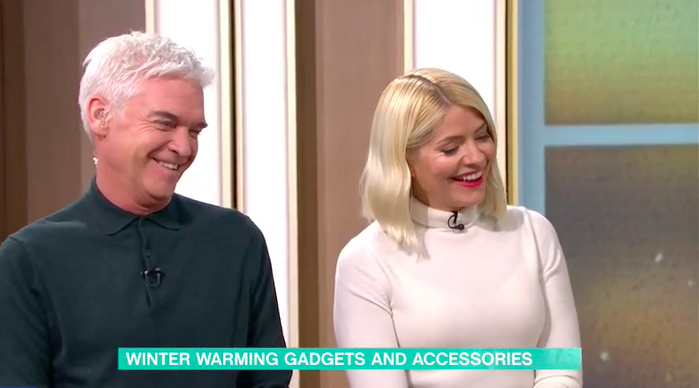 But when Alice presented the duo with a microwavable hand warmer and referred to it as a "muff", the pair couldn't contain their laughter at the innuendo.

The cute sheep hand warmer left the hosts in hysterics, as Alice said: "This is like a muff and it smells of lavender. Who knew my muff smelled of lavender?"

As the presenters began to dissolve into sniggers, Phil said: "What are you doing? You're digging yourself a massive hole and you're throwing us all in it." 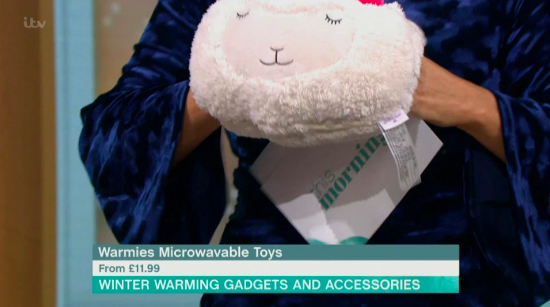 Alice continued: "Well, you keep your hand in it and you keep warm. What's the problem?"

They later moved on to discuss strap-ons... Oo-er missus!

Fans were amused at home, too, with one tweeting: "Although I am quite prudish I do laugh with the innuendos @thismorning @Schofe @hollywills. Muffs and strap-ons, small minds hey?"

Another said: "Phil and Holly crack me up - killing themselves laughing at the woman saying muff and then Phil saying strap-on #ThisMorning."

However, some accused the hosts of making the "same old tired jokes" and one accused Holly of being "immature".

Long-term fans of This Morning won't be surprised to hear of Phil and Holly's behaviour, as they are well known for their uncontrollable giggling fits on air.

Last month, the pair were criticised for laughing through a Halloween segment so much they couldn't speak.

Some viewers accused the pair of being unprofessional.

However, they have insisted they are never told off for giggling. 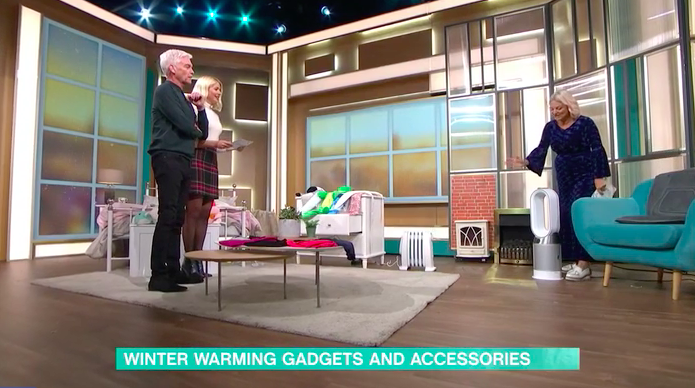 "Holly and I both know how far to go. There is definitely a kind of 'laughing in church' element to it and once we start, it can be hard to stop, but one of us manages to pull it back.

"We get on so well and always have done," he added.

"We have a shared sense of humour that works at the same speed."

Do you think Holly and Phillip are unprofessional or relatable? Let us know on our Facebook page @EntertaimentDailyFix.