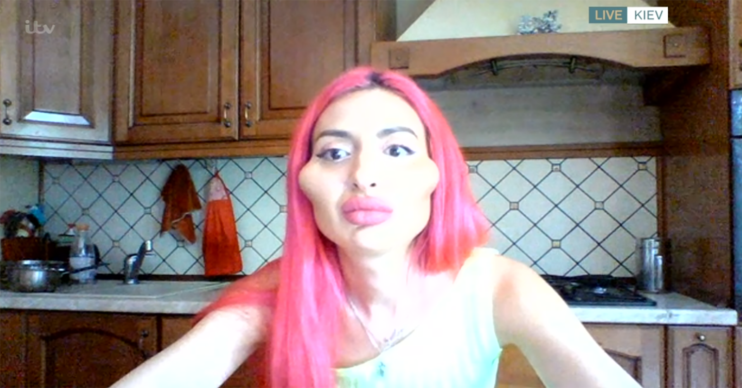 Viewers of This Morning have been left shocked by a woman who has injected her own face with filler.

Anastasiia Pokreshchuk from Ukraine said she has been putting filler into her face, particularly her cheeks, and she has no plans to stop.

She said she has got “more attention” since getting filler and her mum thinks her transformation is “crazy”.

When asked why she wanted to achieve that look, Anastasiia said: “I love this look you know.

“I was like a grey mouse. My nose was too big and now that I have big lips and big cheeks, it looks great.”

Phillip Schofield asked: “You don’t think [doing it yourself] is incredibly dangerous?”

Anastasiia replied: “No… yes it can be dangerous but I do it with doctors and now I’m learning in an online school.”

She continued: “I was worried yes but I loved it.”

My nose was too big and now that I have big lips and big cheeks, it looks great.

When told about the risks the filler could cause, such as disfigurement or even death, Anastasiia insisted: “Die? No.

“Everything is steralised when I’m doing this. I do it like a doctor.”

Speaking about the attention she gets, Anastasiia said: “Of course I have more attention with my fillers and romantic also.

“But I don’t think this is all about my cheeks, I’ve become more self confident.

“My mum thinks this is a little bit crazy but what can she do.

“No regrets! I’m happy with my cheeks.”

'I love this look'

Read more: This Morning guest claims people are suffering because they can’t get beauty treatments

Viewers were shocked by Anastasiia’s appearance.

One person wrote on Twitter: “Yes she’s getting attention…all for the wrong reasons. Sorry but she looks like a caricature drawing.”

Another said: “I can’t believe women inject this stuff into themselves, period! #ThisMorning.

“She clearly has self esteem issues, that should be worked on rather than butchering herself!”

A third added: “Can’t believe what I’m seeing, she was so pretty before and she’s now risking her life.”

Yes she's getting attention…all for the wrong reasons. Sorry but she looks like a caricature drawing #ThisMorning

I can’t believe women inject this stuff into themselves, period! #ThisMorning She clearly has self esteem issues, that should be worked on rather than butchering herself!

Cosmetic surgeon Alex Karidis also appeared on This Morning and warned Anastasiia against doing her own filler.

He said: “There’s a reason why injectable fillers are administered by experienced medical practitioners.

“There’s always potential complications that can occur even in experienced hands, such as allergic reactions, infections and even blindness.

“The difference is an experienced injector can identify these problems and address them.

“For someone to start injecting these on their own is madness really.”

What do you think? Go to our Facebook page @EntertainmentDailyfix and leave a comment to let us know.