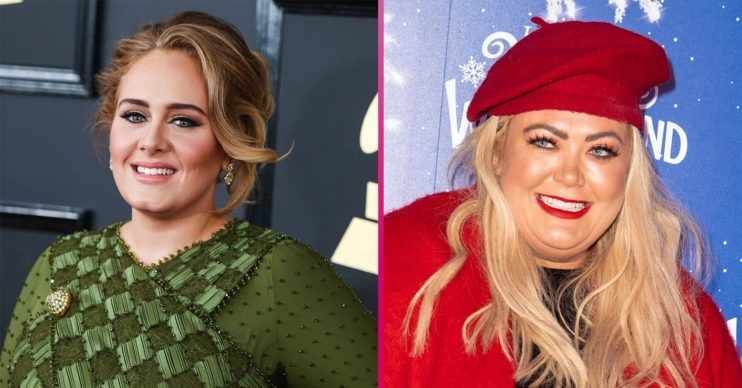 Viewers of This Morning are convinced an Adele impersonator looks far more like Gemma Collins.

Maria Herriot is one of the UK’s most popular Adele impersonators.

Earlier this year, Adele, 32, sparked a huge reaction after showing off her slimmed-down frame.

But, like many Adele impersonators, Maria is worried the singer’s new look could put her out of work.

What did Maria say?

Maria told Eamonn Holmes and Ruth Langsford: “I’m a tall girl so I do carry my weight well but I have gained quite a lot of weight recently.

“Earlier on, I heard you say that I’m risking my life but I actually believe I’m saving my life.

“If I get any bigger I’m risking diabetes.”

When asked if she’s having the surgery for health reasons or to help her career, Maria said: “Both. It was something that was already in the pipeline and I’ve just pushed it forward by going privately.”

Eamonn asked: “So Adele has done you a favour?” to which Maria said: “Yeah she has.

“But she’s got there a bit too fast for my liking.”

She said: “I want to lose between seven and eight stone.”

Maria has taken out a £11,000 loan to get the surgery and was asked about whether her family are concerned.

She said: “My family are concerned but I did have a gastric band 13 years ago.

“Due to complications, I had it removed last April and the bypass was something that was going to be happening.

“Unfortunately I got accidentally discharged from the hospital through the NHS.

“Now with the lockdown there’s going to such a delay that I’ve decided to speed up the process and borrow the money.”

Speaking about what the surgery entails, Maria said: “This is rewiring of your insides so they bypass part of your intestines and make your stomach smaller.”

Viewers shared their thoughts on Twitter, with many saying they thought Maria looked more like Gemma than Adele.

A third added: “No shade but she’d be better off doing Gemma Collins #ThisMorning.”

Anyone else think the Adele impersonator looks more like a Gemma Collins impersonator? #ThisMorning