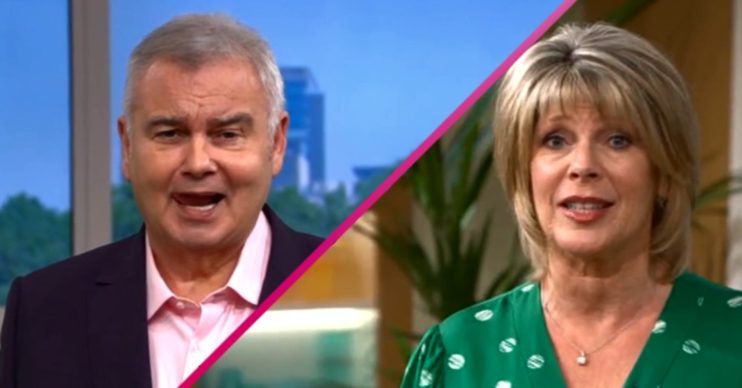 Some have demanded Holly and Phil return from their holiday

This Morning hosts Eamonn Holmes and Ruth Langsford are on day two of their summer presenting duties and already viewers are getting fed up of their bickering.

The married couple are known for their playful on-air spats, but today’s This Morning (Tuesday, July 14) seemed so full of it some fans said they were switching off.

Others insisted they needed Holly Willoughby and Phillip Schofield to return from their summer break as soon as possible.

Read more: Viewers divided over Eamonn and Ruth hosting This Morning over summer

What did Eamonn and Ruth do on This Morning today?

Eamonn and Ruth’s bickering was notable during Spin to Win.

It’s no secret Eamonn isn’t the biggest fan of the game, but he seemed to be taking it out on Ruth. He called one contestant a “loser” and Ruth ticked him off.

Also, at another point later in the show, Ruth told her husband to “sshh”.

Had to turn off today as Eamonn Holmes is being so rude and vile to Ruth.

Those watching at home are already a bit fed up of the constant bickering and expressed their feelings on Twitter.

“Spin to bicker more like with these two! Morning this moaners!” said one.

Another used slightly more colourful language: “Why the [Bleep] are these two married #ThisMorning?” they asked.

There was a viewer who said they had had to switch off over Eamonn’s behaviour.

#ThisMorning had to turn off today as Eamonn Holmes is being so rude and vile to Ruth. what is his problem!!

Another replied, it was “their act”, but agreed it was “repetitive”.

It’s their act. People like it. Gets a bit repetitive though.

I can’t bear watching #thismorning anymore it’s painful. I’ll be back on Friday.

Bring back Holly and Phil #thismorning 😫

Ruth and Eamon are on one today 🤣🤣🤣 #thismorning @thismorning

Some This Morning viewers love Eamonn and Ruth

However some love the couple and would rather they took over from Holly and Phil permanently.

I think we should have Ruth and Eamonn everyday on #ThisMorning Time to sack Schofe and H ! Eamonn makes me laugh, he just wings it everyday lol 😂

How long are Eamonn and Ruth hosting This Morning?

The couple will present This Morning Monday to Thursday for the next six weeks of summer.

Holly and Phil will be back in September to resume their usual weekday roles, with Ruth and Eamonn moving back to their Friday slot.

While Ruth and Eamonn take the reigns, on a Friday they will be replaced by a whole host of other famous faces, including Rochelle Humes and Ore Oduba this week.

Dermot O’Leary and Alison Hammond also join the Friday line-up over the next few weeks.

Are you enjoying Eamonn and Ruth on This Morning? Leave us a comment on our Facebook page @EntertainmentDailyFix and let us know what you think of this story.