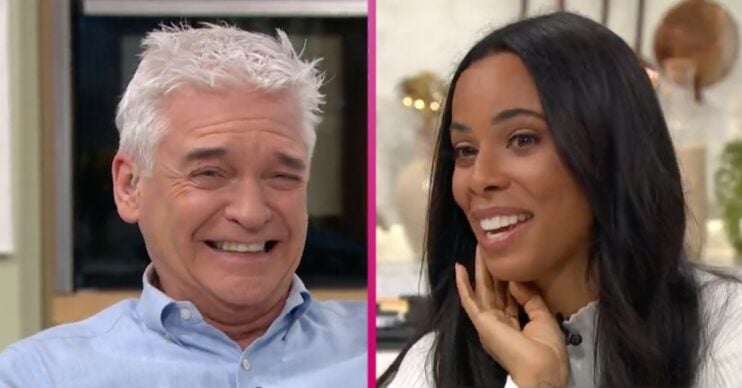 The pair struggled to keep a straight face!

Phillip Schofield and Rochelle Humes were forced to apologise today for their behaviour during a segment of This Morning.

The presenters couldn’t help themselves from laughing when a viewer phoned in to talk about their custard phobia, with some viewers branding the hosts “rude” for it.

Nik and Eva Speakman were welcomed onto the show today to talk to viewers about some of their phobias.

The Speakmans are therapists, who over more than twenty years have helped people with their fears, addictions, and disorders.

They probably weren’t expecting someone to phone in to This Morning today claiming they have a phobia of custard though!

The viewer’s phobia of custard was so bad that hearing or saying the word “custard” caused them to retch down the phone.

“I see both you and the custard as equal victims here,” Eva told the viewer, causing them to gag.

Phillip and Rochelle immediately covered their mouths as they tried to hold in their laughter.

“Ok, sorry, ‘yellow stuff’, I do apologise,” Eva said as Phillip and Rochelle continued to giggle.

Eva then continued to talk to the viewer about her custard phobia as Phillip and Rochelle cracked up.

“You and the yellow stuff are on the same team here,” Eva said. “You’re both victims of that person that forced you to eat it in the first place.

“You think badly of it and it did nothing wrong!”

Eva then turned to Phillip, who was giggling uncontrollably, and asked if he was alright.  The viewer then gagged again, causing everyone to burst into even more laughter.

As the viewer continued to explain that she even hates the different coloured custards, gagging the whole time, Phillip fully lost it and covered his face with his hands.

At the end of the viewer’s call, Phillip apologised to her.

“But that is just an extraordinary noise,” he said of the retching. The caller then said if they can help cure her phobia, she’ll have a bath in custard!

How did This Morning’s viewers react?

Viewers of the show were divided over what they’d just witnessed. Some were very unimpressed with Phillip and Rochelle’s behaviour and took to Twitter to slam them.

One ranted: “Think it’s rude how Phillip and Rochelle were laughing at the lady on the phone who says she is scared of Custard. To them it’s a joke but it isn’t.”

“As if laughing at her wasn’t bad enough you’re now replaying it. Wow!!” another viewer wrote in response to This Morning uploading a clip of the segment to Twitter.

“Sorry but I think @Schofe & @RochelleHumes are so unprofessional laughing like that at someone’s phobia!!” a third said.

Other viewers found the segment hilarious and were loving that Phillip and Rochelle got the giggles.

“Love this, so funny. Great to see Philip gets the giggles with Rochelle and he does with Holly [Willoughby],” one viewer tweeted.

What did you think of Phillip and Rochelle laughing? Head on over to our Facebook page @EntertainmentDailyFix and let us know!