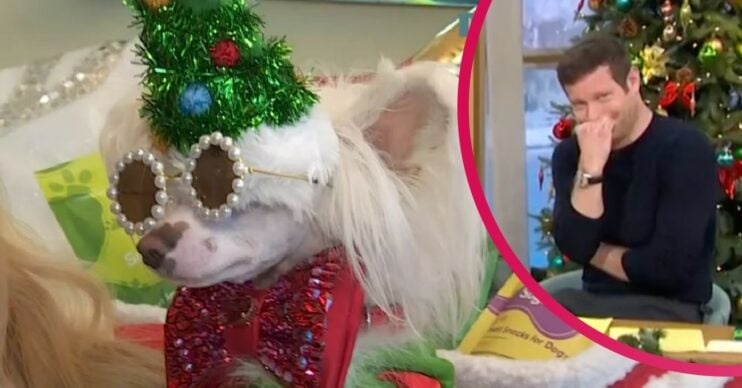 Fans were furious with today's guest!

Furious This Morning viewers have accused a guest on the show today of ‘animal cruelty’ for dressing her dog up.

Alisa from Pontypridd, South Wales appeared on the show with her pet pup, Fabio, and showed off his Christmas outfit.

On today’s edition of This Morning (Friday, December 3), Alison Hammond and Dermot O’Leary welcomed Alisa onto the show. She claimed to have spent thousands on her pooch this Christmas.

Alisa appeared on This Morning alongside her dog, Fabio, today. Fabio was dressed up in a little Christmas outfit. The tiny dog had a green jacket on, as well as a bow tie and big sunglasses. Fabio also had a little Christmas tree hat on his head too.

Alisa, also dressed up in a Christmas outfit, told Dermot and Alison about how much she loved little Fabio.

“He’s my world, Alison, my life revolves around him,” Alisa said. “His name is Fabio. He’s the love of my life. He loves dressing up.”

On the subject of pet pup Fabio getting dressed up, Alisa said: “He loves it, he really loves it.” She then said that Fabio gets into a “really relaxed mode” when little outfits are put on him.

What else did Alisa say about Fabio?

Alison said that Fabio looked “stunning” in his Christmas get-up.

Alisa then admitted that as soon as she’d got Fabio, she’d started splashing the cash on him.

“I’ve had this little grotto built for Fabio,” she revealed. “We’ve got a little sleigh for him. We’ve got a tree that’s covered in dogs.”

Alisa then revealed that she’d spent a whopping £20,000 on Fabio “over the course of the year”! She also admitted to pushing the pooch around in a pram too when they were out.

However, many This Morning fans were left furious at what they’d seen of Alisa and Fabio on the show and quickly took to Twitter to let their anger be known.

What did fans of This Morning say online?

“Surely this is animal cruelty?!” one This Morning viewer fumed. “Anyone who thinks their dog wants to be dressed like peak Elton John needs to give their head a shake.”

Another said: “The dogs not relaxed, he’s frozen in absolute horror. She needs arresting for animal cruelty.”

Other viewers were also just as furious about how much money Alisa spent on her dog. Many called for her to give the money to dog-related charities, while others simply said it was “obscene” she’d spent £20k on a dog.

One viewer seemed to be on Alisa’s side, though.

“Bless her, she’s happy with her dog. It’s her money,” they said.

Another added: “Oh my god this woman is the best. I want everything for my dog.”

What did you think of Fabio’s little outfits? Leave us a comment on our Facebook page @EntertainmentDailyFix and let us know.