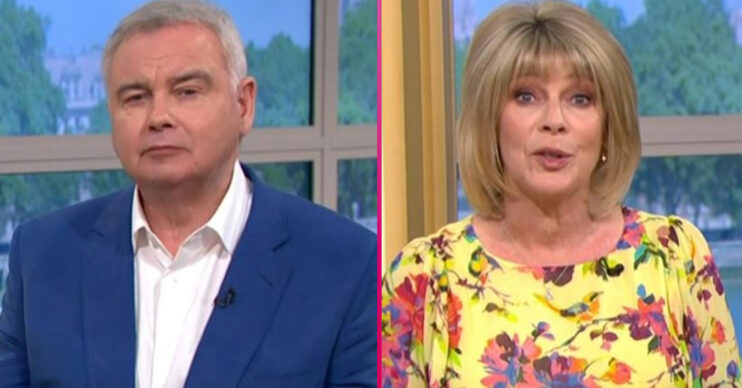 This Morning: Eamonn Holmes and Ruth Langsford return for the summer

The duo are hosting all summer!

On This Morning today, presenters Eamonn Holmes and Ruth Langsford returned for the summer.

The husband and wife duo will be hosting the daytime programme for the summer as Holly Willoughby and Phillip Schofield take a break.

On Monday, viewers were delighted as Eamonn and Ruth were welcomed back onto the show.

What did This Morning fans say about Eamonn and Ruth today?

Fans were thrilled to have the pair back after they got replaced on Fridays at the start of the year.

One person said on Twitter: “I’m so glad Eamonn and Ruth are back. How I missed their bickering.”

Another wrote: “So lovely to have Eamonn and Ruth back.”

I’m so glad Eamonn and Ruth are back. How I missed their bickering #ThisMorning

So lovely to have Eamonn and Ruth back ❤️❤️ #ThisMorning

A third added: “Oh Ruth and Eamonn I’ve missed your Bickering it’s so good to have it back.”

They want Ruth and Eamonn permanently!

Others wanted Ruth and Eamonn back permanently.

One tweeted: “Bring back Eamonn and Ruth permanently and dump [Dermot] O’Leary and [Alison] Hammond.

“Eamonn and Ruth have amazing chemistry but there is no chemistry between O’Leary and Hammond.”

Another said: “So glad to have quality presenters back in the form of the fantastic Eamonn and Ruth!

“Doesn’t ITV realise that we don’t want O’Leary and Hammond on Fridays?”

A third added: “Thank goodness they’re back! Need them back on Fridays!”

Meanwhile, at the end of last year, viewers were devastated when it was announced that Eamonn and Ruth would no longer host Friday editions of the programme.

Instead, they’ve been replaced by Alison Hammond and Dermot O’Leary.

Alison and Dermot have received a mixed reaction, with some fans saying they preferred Eamonn and Ruth.

One said on Twitter: “We want Eamonn and Ruth, for the sole reason, they know how to present a TV show.”

However, some people said it was “refreshing” to have a different dynamic.

One fan wrote: “There’s something quite refreshing about Alison and Dermot presenting This Morning!”

Have you missed Eamonn and Ruth? Leave us a comment on our Facebook page @EntertainmentDailyFix and let us know.